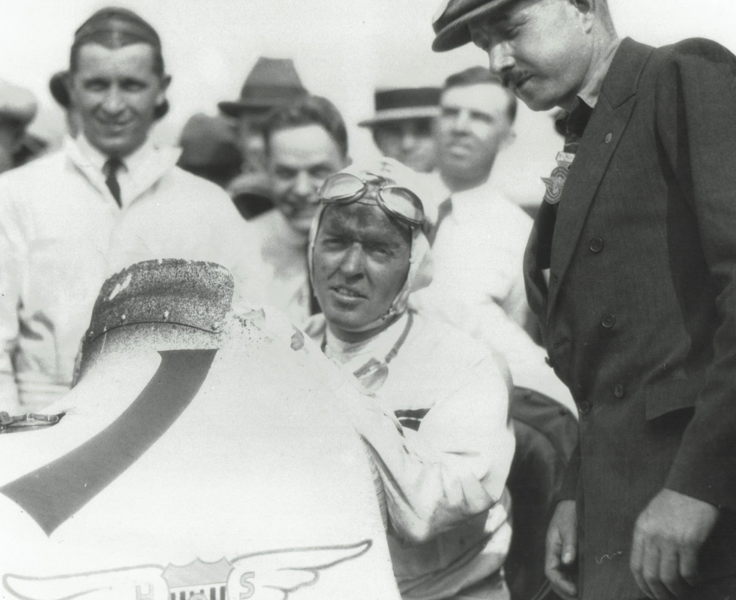 Of all the successful American racing drivers in the first three decades of this century, there is one who stands almost alone for his level of achievement-Tom Milton. Possessed of a powerful sense of personal integrity, enormous courage, and unbounded capacity for hard work, "Tommy" was able to post an incredible list of achievements. They included numerous land speed records, 50 board track lap and distance records, two victories in the Indy 500 (the first man to accomplish this feat), 15 major victories in races over 100 miles, and the American Drivers' Championship for 1921. Even more amazing was that Tom Milton compiled this outstanding record with a serious disability-100 percent blindness in his right eye and impaired vision in his left.

Thomas W. Milton was born November 14, 1893 in St. Paul, Minnesota, son of a prosperous dairy owner. Despite the lack of sight in one eye, he quickly became an excellent athlete. Early exposure to automobile racing provided an irresistible draw for Tom's fiercely competitive nature. In 1913, he appropriated the family's aging Mercer and spent two years on the county fair circuit as part of Alex Sloan's carefully orchestrated traveling circus. Tom soon began to blow off the show's stars, an act of independence for which he was eventually fired. He then joined the team of Fred and Augie Duesenberg, and after a slow start worked his way up to be their number one driver. His first major victory came in the fall of 1917 at Providence, Rhode Island, in a hotly contested 100-miler.

Unable to join the armed forces during World War I due to his impaired vision, he stayed with the Duesenbergs. When they developed their first straight eight racing engine, he became the man to beat, winning twice on the Uniontown boards and at the prestigious Elgin road races in 1919. Later that same year Tom was seriously burned at Uniontown, but struggled back after only two months to set numerous world closed course records at Sheepshead Bay. While convalescing, Milton also worked on plans to capture the Land Speed Record. Following a winter of work building a radical twin-engined car, on April 27, 1920, he broke Ralph DePalma's old mark with a speed of 156.046 mph at Daytona Beach.

But his four-year relationship with Fred and Augie soured in a dispute over teammate and protege Jimmy Murphy's unofficial runs in the record car. Following three major boardtrack victories, and third place at the Indy 500, Tommy left the team to strike out on his own. While working to develop his own new machinery, he accepted a ride in a marginally competitive Frontenac for Indianapolis in 1921. Using careful strategy and a clever ruse to fool race leader Roscoe Sarles, he came home the winner in America's most prestigious race. By this time Tommy also had combined forces with Billy Durant's wealthy son, Cliff, and built a car that was almost unbeatable on the boards. With this "Durant Special" he won several important races and the 1921 drivers' championship, only to have the car outlawed in 1922 by the AAA in an argument over its name.

In 1923, he drove his own H.C.S. Miller and became the first man to capture a repeat victory at Indy. Later that season he also set long-standing dirt track one lap and 100-mile distance records at Syracuse, New York, in a totally dominant victory. For 1924, he built a new Miller, the so-called Convertible, and with it set world speed records of 141.17 mph and 151.26 mph for International Classes C and D at Muroc Dry Lake.

In the last two years of his driving career he formed his own three-car team with drivers Bob McDonough and Ralph Hepburn, and won three important 250-mile races at Charlotte (October, 1924), Culver City, California (March, 1925) and again at Charlotte (November, 1925). He officially retired from driving after the Fulford 300-mile race in February of 1926, and accepted the offer of Col. Jesse Vincent for an executive position at the Packard Motor Company.

Never far from racing, in 1927 he and partner Cornelius Van Ranst developed Cliff Durant's Detroit Special, a radical new car for Indianapolis. When Cliff fell ill, Tommy took the wheel and brought it in eighth after a number of unscheduled pit stops. Following his "re-retirement" he worked with Packard on a variety of engineering projects, including the design and development of the only front-wheeldrive car the Packard Company ever made.

With his brother, Homer, he founded the Hercules Drop Forge Company and the Milton Engineering Company. An annual celebrity at the Indy 500, in 1949 he accepted the pleas of AAA officials to become Chief Steward, and for several years thereafter ran the race in a typically businesslike and evenhanded fashion. Tommy Milton died in 1962, following a long illness. A genuine folk hero to competitors and fans alike, he was always respected for his enormous courage, keen intelligence, and unquenchable spirit. He was, as all who knew him could attest, a true American Champion.