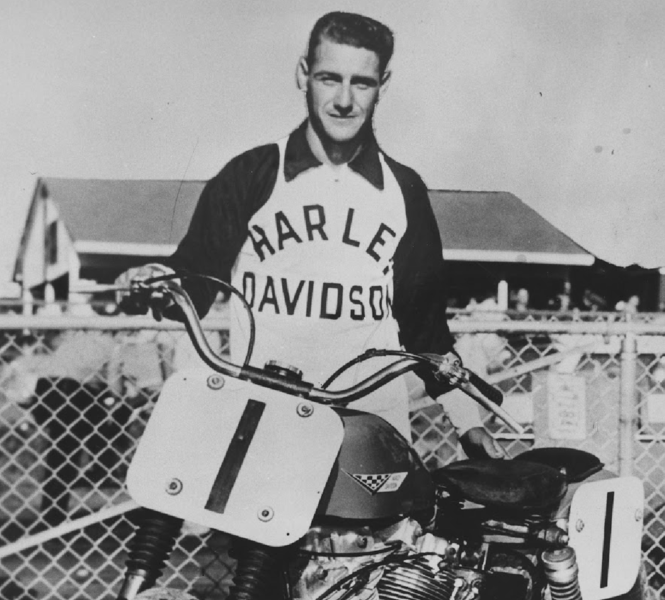 That hardscrabble realm has previously produced Hall of Famers "Smoky Joe" Leonard, Dick "Bugsy" Mann and "King" Kenny Roberts, and in 1998 we add to that list perhaps the best dirt tracker of them all Carroll Resweber.

"Roberts and Leonard were great racers and tremendously versatile," says Mann, himself a double Grand National champion, but on dirt, Resweber was in a class by himself. He may have been the greatest dirt tracker in the world."

Strong words, but the facts are on Bugs' side. In the late '50s, Resweber was the eager young charger; a slender Texan with a jutting chin; teammate and heir apparent to the legendary Leonard on the HarleyDavidson factory squad. He won his first championship in 1958; Leonard subsequently jumped into a champ car, destined for Indy 500 fame; and with that Resweber simply took over the sport. He eventually won four consecutive championships, and during that memorable string his only real challenger was Bart Markel.

"He was the top guy when I came up," Markel remembers. "I remember very well the first time I beat him, on a mile track at Detroit. That was a big deal. Not many people beat him on the mile. "

"Bart could beat Carroll occasionally," Mann remembers, "and he did it with guts and courage.

But Resweber had finesse, PLUS guts and courage. His technique was better than all the other guys."

Back then, dirt track bikes raced unencumbered by brakes, backing into the corners in breathtaking full throttle broadslides, the rear wheel trying to pass on the outside. Resweber's storied technique had much to do with body position and the awe-inspiring ability to slide the front wheel, inducing an intentional "push" to scrub off speed. In a car that's a great way to go fast; on a bike; it's a great way to go on your head.

Always a man of few words, Markel sums up Resweber's style another way; "He could get his feet on the pegs before anybody else. "

That Resweber won four straight championships is remarkable - it's a record that stands to this day, tied only by the sport's current king Scotty Parker. Moreover, Carroll compiled his amazing career numbers during one of the most competitive periods in the history of American dirt track racing.

Unfortunately, Resweber's career ended violently and short of its peak on a dusty half-mile in the summer of 1962. Locked in championship battle with the newcomer Markel, Resweber had won three of 11 races and was determined to make it five straight titles. But in morning warmups at Lincoln, Illinois, a crash in front of him left the champion with nowhere to go. The resultant injuries ended one of the great careers of all time.

"If he hadn't been hurt he'd have won it again," Mann remembers. "And in fact there was nobody on the horizon who was going to beat him for a long, long time."

Crowding the horizon at the time of Resweber's accident were the likes of Mann himself, Dick Hammer, Gary Nixon, Ronnie Rall, George Roeder, Ralph White and others. That Mann considered none of them Resweber's equal is one measure of the guy's greatness. Thirty-six years after that career-ending crash at Lincoln, Bugs offers another; "To this day, I tell the young kids on the way up, 'If you want to pick up a half-second a lap, just go get a picture of Carroll Resweber and study it.' Everything he did on the motorcycle was just about perfect. "