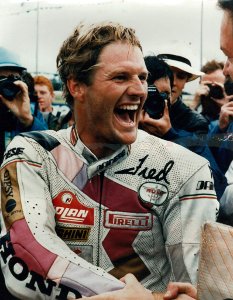 Fred Merkel was born in Stockton, California, in 1962 to Jerry Merkel, a professional dirt track racer. "You would get 400-600 riders for a Friday night race at San Jose, Fremont, Chico, Oakdale, or Lodi Cycle Bowl, with races four nights a week," Fred remembers. "The racers brought their sons with mini-bikes and we would cause havoc. For intermission they would have kids' races with me, Jimmy Felice, Randy Mamola, Doug Chandler, and Jeff Haney." By age 12, Fred was 80cc and 100cc champion.

"We raced against the best guys from the East Coast and we just stomped them. We were a bunch of young animals that had pushed our talent level quite high." In 1977, Jerry brought a road racing MT125 Honda home for Fred. By 1981, he was in the 250GP class as a Pro Novice. His first two races were Laguna Seca and Pocono. "Two Nationals, two wins… front row, holeshot, see ya later, bye. That was the start of it." For 1983, Honda added Fred to their Superbike team of Steve Wise and Mike Baldwin. At Portland, Merkel won his first AMA Superbike race.

Nineteen-eighty-four brought victory in the 8 Hours of Suzuka with Baldwin, and he dominated the AMA Superbike season, winning 10 of 13 and his first Superbike Championship. For 1985, Merkel won six of 12 for a second title, and then, in a legendary campaign against Wayne Rainey and Kevin Schwantz, a third in 1986.

For 1987, Merkel raced Formula 1 TT in Italy. Virginio Ferrari won that World Championship on the Bimota, beating Honda, a company hundreds of times its size. In response, Honda introduced the RC30 for the new World Superbike Championship. "Oscar Rumi came in with a checkbook, and I provided all the motorcycles and parts. As long as we could pay for the racing, Honda would give me anything we want."

At the final round, Merkel's helmet said, "If you want blood, you've got it." Fred laughs, "I always was that way with every race, with every racer." The pressure of a four-way battle was wearing on a sleepless Merkel, but once the visor came down he rode brilliantly, winning Race 1, followed by a conservative Race 2 to take the first World Superbike Championship.

Nineteen-eighty-nine was even more competitive. "There were 10 guys on the grid that could win." At the New Zealand finale, Merkel clinched his second World Superbike championship. Hoping to make it three straight in 1990, it all went wrong at Suzuka. "That was where I broke my neck... Game over."

After 1991-93 in World Superbike, Merkel returned to the AMA. Riding for Suzuki in 1995, he won seven of the first nine 750 Supersport races before a career-ending crash at Firebird Raceway. "I had paralysis in my shoulder and arm… there was just no way I could do it. I'd been racing since I was six, and had broken just about everything I own."

Merkel lives in Taupo, New Zealand, running his business updating powerplants and trout fishing at every opportunity. He's one of the giants of motorcycle racing from an era of American dominance in World Superbike and 500cc Grand Prix.