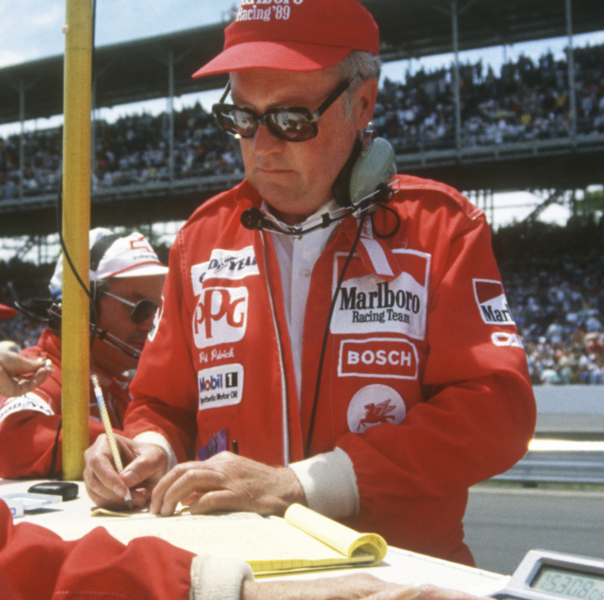 Patrick Racing was one of Indy car racing's top teams from the 1970s through the turn of the century. Ueal Eugene "Pat" Patrick was an independent oilman or wildcatter headquartered in Jackson, Michigan, who first got involved in racing when he sponsored Walt Michner's Indy car in 1967.

Patrick started his own team in 1970 with Johnny Rutherford driving his car and quickly developed it into a frontrunner. Gordon Johncock won the 1973 Indianapolis 500 in one of Patrick's STP Eagles and took the 1976 USAC Championship aboard one of Patrick's own cars, appropriately called Wildcats. Johncock also won the 1982 Indy 500 aboard a Wildcat while Emerson Fittipaldi won both the 1989 Indy 500 and CART championship with Patrick's team.

Patrick spent a few years out of racing but returned in 1994 in partnership with Firestone. After spending a year testing Firestone's new Indy car tires, Patrick's team went racing in 1995 with Scott Pruett who won that year's Michigan 500. Patrick's team continued to race in CART through 2002 before spending its final two years in the IRL.

Patrick is also renowned as the co-founder with Roger Penske of CART in 1979. Patrick and Penske provided the business brains and money to develop CART into a very successful series through the turn of the century.

Patrick's team was based in Indianapolis barely two miles north of the Indianapolis Motor Speedway. Master mechanic George Bignotti ran Patrick's team through most of the ‘70s, with Jim McGee taking over the reins in 1980. McGee spent most of the last 25 years of his career with Patrick and explains why he joined Patrick after spending a few years as Penske Racing's Indy car team manager.

"Pat wasn't as involved in racing as Roger and didn't know as much about the sport as Roger," McGee reflects. "But he knew enough to hire good people and let them have the ball and make suggestions and let them do it. Pat was a great guy to work for because he lets you do your own thing. That's what really attracted me to Pat because I was able to do things my way.

"But it wasn't my way or the highway. I listened to and respected Pat's input. I really appreciated his input because he was a very smart businessman. A lot of things Pat said made a lot of sense. Pat always talked to me as a partner. With Pat you definitely felt that you were integral with the foundation and that was a key part of our success."

"With Patrick Racing I learned so much about oval racing, just like I had learned so much about Formula 1 and road circuit racing with Colin and Lotus, and Pat Patrick was a perfect team owner. Pat pulled together the sponsorship and financial support, hired the right people and let us do our jobs."