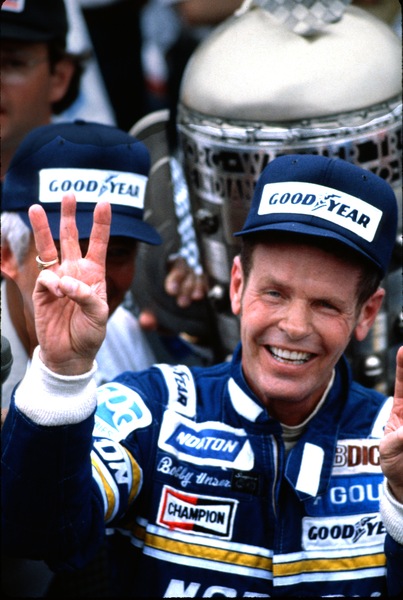 Only three drivers history own more Indy car victories than the legendary Bobby Unser, who won 35 during his fabulous career. One is his brother, Al, while the other two are AJ. Foyt and Mario Andretti!

Bobby started driving modfieds in 1949 at the tender age of 15 and before his surprise retirement from driving in 1981, he had triumphed in nearly every form of the sport. He won three Indianapolis 500s in 19 attempts (1968, 1975 and 1981), becoming the only driver in history to win the "500" in three different decades!

He made his "500" debut in 1963, driving the famed Hotel Tropicana Las Vegas Novi Special, but hit the wall on the third lap of the race. He returned to drive the powerful Novis in 1964 and 1965 but was involved in the fiery crash on the second lap of the 1964 race, and was forced out after 69 laps in 1965 with a broken oil line.

He scored his first "500" victory in 1968 after setting a new qualifying record of 169.507 mph for piston engined cars. His winning speed of 152.882 mph was also a new record. He also won the first of his two USAC National driving championships that season, beating Mario Andretti by only 11 points! 11e won races at Las Vegas, Phoenix and Trenton, plus the Pikes Peak Hill Climb for a record 9th time. His second USAC National title came in 1974.

In 1972 he again established new 1and 4 lap records at Indianapolis Motor Speedway, winning the pole for the first time at an average speed of 195.940 mph. He would win the pole again in 1981 (his final "500" start) and started on the front row nine times. In 1974 he was named "Martini and Rossi" Driver of the Year.

His final two Indianapolis 500 victories were memorable. In 1975 he was leading when a downpour halted the race after 174 laps. In 1981 his victory was delayed for several months in favor of Mario Andretti while appeals panel debated yellow-flag passing infractions. Unser's win was restored by the panel in October.

One of the most versatile drivers in auto racing history, Bobby owns victories in the International Race of Champions Series, USAC Sprint Cars, Stock Cars and Midgets. In 1993, he came out of retirement to participate in USAC's "Fast Masters Tournament," designed for drivers past the age of 50 driving identically prepared Jaguar XJ220s. He won the championship, conducted at Indianapolis Raceway Park, emerging as the champion from a field of 42 drivers!

Extending his career beyond driving, he has become a familiar face to race fans worldwide as a color commentator for ABC Sports.