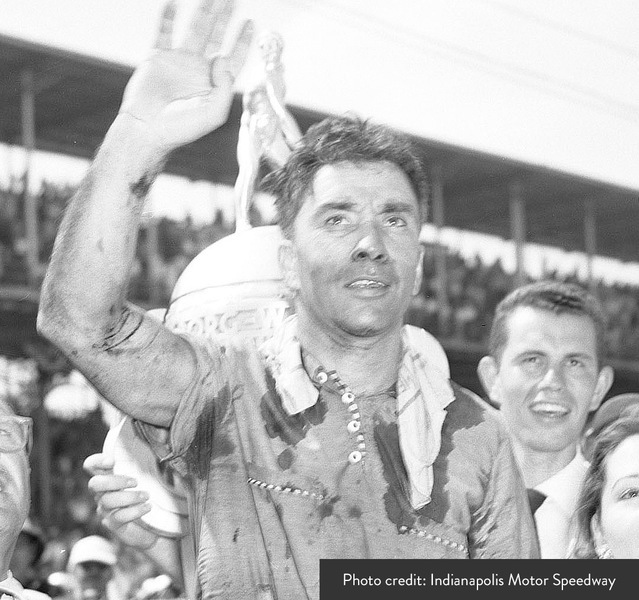 Bill Vukovich's Indianapolis 500 career was meteoric and placed him among the best ever to compete at the famed Memorial Day Classic. A Hall of Fame open wheeler with only five races at the Brickyard must have been mighty good. This charger with fire in the belly and a beat-the-devil attitude was as good as they come! He started racing in the 1930s and in his first Midget race in 1938 he flipped and suffered broken ribs and a broken collarbone. Seven weeks later he was back in a race car. After spending the war years repairing Jeeps and trucks, he bought a Midget and became a Champion. He won the 1946 and 1947 UBA West Coast titles and in 1950 he won the AAA National Midget crown.

After a lackluster rookie year, he began a streak that easily could have resulted in four consecutive Indy wins. In 1952 he appeared headed for victory when a quarter-inch pin on the steering arm gave out on the 192nd lap, sending his car into the wall and allowing Troy Ruttman to post the win. In 1953 he endured searing heat and won the 500, one of only five drivers to finish the race without relief. He repeated the triumph in record time in 1954.

Vukie's blazing spirit cloaked in a cool demeanor was evident in the 1954 Pan American Road Race. His terrified co-driver repeatedly protested as Vukovich sliced corners on the precipitous mountain roads. When the car shot over a bank and dropped 50 feet, Vukie took his hands off the wheel while the car was still airborne and said, "OK, you drive it".

Returning to the Speedway in 1955, Vukie dominated his fourth straight race and was on his way to becoming the only driver in history to win three 500s in a row. Relentlessly building his lead, Vukie prepared to put an additional lap on three back markers. A chain-reaction accident formed a barrier across the backstretch. Vukie tried to pass them through six feet of space by the outer wall, when a car spun into his path. Vukie's car flew over the wall and crashed in horrifying finality.

Fire and ice -- Bill Vukovich shunned adoring crowds, yet had an unquenchable desire to excel for them. His life ended as it had been lived -- going for it all!