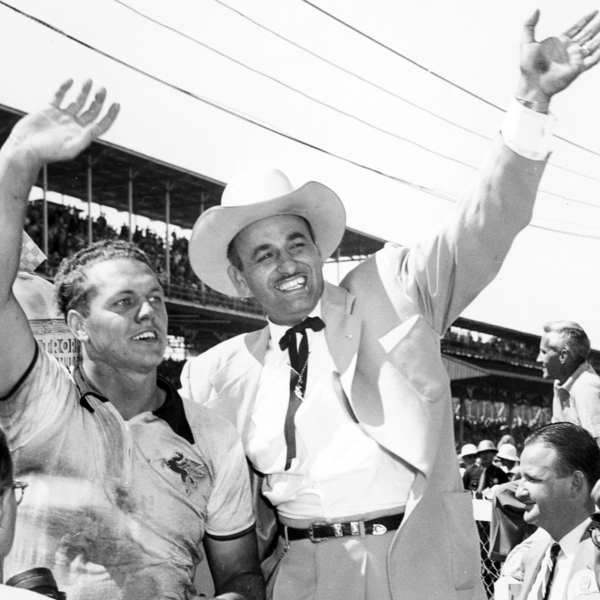 One of the most influential men in American motorsports history, J.C. Agajanian never achieved his childhood dream of becoming a race driver. He did almost everything else, though, from promoting races to building cars and discovering drivers.

His trademarks were a cowboy hat and high-heeled boots made especially for him in Spain. From 1948 through 1971 his cars won the pole position for the Indianapolis 500-Mile Race three times, set four track records and won the race twice, Troy Ruttman (1952) and Parnelli Jones (1963) both won the 500 in Agajanian machines.

The Armenian heir to a fortune built on garbage collection and pig farming, J. C. was partial to the number "98" and it was evident on his Indianapolis, Sprint and Midget cars. He was instrumental in the development of the air jack for faster tire changes at Indy and in the 1930s was president of the Western Racing Association. As a race organizer, his expertise spanned the country and he became the first race organizer to present 250 United States Auto Club events, ranging from Midget races like the traditional Turkey Night Grand Prix at his beloved Ascot Park in Gardena, California, to numerous Championship Dirt Car races at state fairgrounds tracks.

Agajanian was a key figure in the re-emergence of championship racing on the West Coast after a long absence. It took Aggie's charisma and charm with the news media and fans to eliminate ill will and recapture the glory of the golden days of motorsports. More than anyone, Agajanian kept the Pikes Peak Hill Climb alive, lending his talents to that event to help it maintain its status as a world renown sporting event.

Always fielding top equipment, Agajanian provided rides for blue chip drivers like Johnnie Parsons, Lloyd Ruby and Chuck Stevenson. He relished helping young drivers get started. Besides Jones and Ruttman, both Walt Faulkner and Bill Vukovich Jr. drove for Agajanian as rookies. As a promoter, J. C. Agajanian was known for his fair dealings and lucrative purses. His generosity was evident when he helped drivers or others in racing who might have been down on their luck

Colorful, flamboyant and dynamic, Aggie is warmly remembered by nearly everyone in motorsports. There could scarcely be a more popular selection for the Motorsports Hall of Fame.