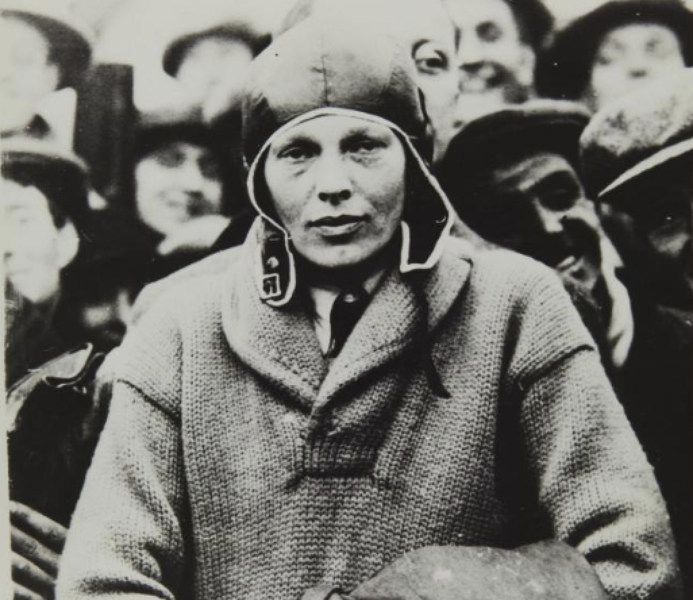 Cool under pressure, courageous nearly beyond reason, possessing an over-whelming drive to be first -- all are attributes of a Hall of Famer. Add tireless championing of women's equality and a brand of leadership that inspires allegiance decades after her death, and you have a heroine who transcends time. You have Amelia Earhart.

Earhart entered three Bendix Transcontinental air races "for fun". In 1933, she took the special prize for first female finisher. In 1935, she calculated that the best finish that could be achieved by her vastly underpowered Lockheed Vega would be fifth place. She cruised in to collect enough prize money to pay her expenses, and fully enjoyed the exhilaration of the cross country jaunt.

Earlier, she had helped organize the first Women's Air Derby. In Columbus, Ohio, the last stop before the finish, Earhart was tied for first place. Co-leader Ruth Nichols crashed on take-off. Next in line, Earhart leaped from her plane and pulled the shaken but uninjured Nichols from the wreckage. Earhart resumed the chase and arrived in Cleveland in third place. The prize she sought was not a win, but to establish for women a lasting place in aviation.

Earhart's numerous records that furthered the advancement of flying and women's place in aviation were important to her. Early in her career Earhart set a women's altitude record of 14,000 feet. Six years later in 1928, she became the first woman to fly across the Atlantic as a passenger. In the early 30s, she set a women's speed record of 181 mph and a distance record of 2,026.5 miles. She flew an autogiro, the predecessor of the helicopter, to an altitude record of 18,415 feet. On May 21, 1932, she became the first woman to fly solo across the Atlantic Ocean. She broke and re-broke women's transcontinental speed records. She also claimed many firsts and speed records for point-to-point flights.

Part of a job she accepted at Purdue University was counseling female students. Her message to the coeds stressed their entitlement, and near obligation, to break with tradition to achieve goals in life. To be the first was an honor to be sought, not feared.

On her last great flight Earhart was to circle the globe at the equator in 1937. No one had done it before. Her burning desire for achievement caused her to shun newly developed direction-finding techniques. With triumph within her grasp, she missed tiny Howland Island in the Pacific, but landed permanently in legend.

After her disappearance, a beacon was constructed on Howland as a guide for aircraft. Like that beacon, Amelia Earhart's guiding light illuminates ultimate possibilities in us all.