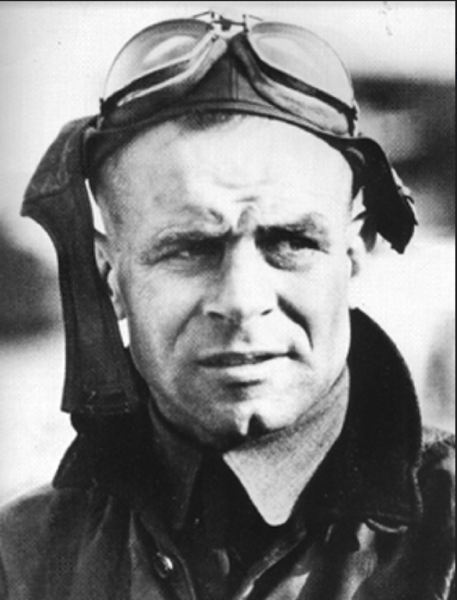 Most people think of Spencer Tracy and "30 Seconds Over Tokyo" when they hear Jimmy Doolittle's name.

Tracy Portrayed Doolittle in that very famous movie which chronicled the most illustrious event in then Lt. Colonel Doolittle's life. The raid, in April 1942, was the first offensive blow of World War II against the Japanese mainland and proved that the Japanese Empire was not invincible.

But few realize that this inaugural Hall of Fame inductee's accomplishments in aviation predate his World War II heroics.

In the years between the Wars, his name spread far and wide as an aviation pioneer. As a fearless test pilot, Doolittle earned a reputation as a daredevil who would try anything in an airplane. In reality, his keen analytical mind calculated every risk. Every "stunt" had a specific purpose for the advancement of aeronautics.

In such fashion in 1927 he attempted the first outside loop, subjecting himself and his aircraft to more stress than had ever been endured. True to his calculations, he survived. His jaunty reply to reporters asking him why he risked the impossible: "Just thought of it on the spur of the moment!"

Numerous speed records were accomplished by Doolittle as a test pilot and racer, including the first crossing of the continent in less than a day in 1922. He is also credited with the first totally blind flight and instrument landing in 1929.

During the 20's and 30's, when exploits of Babe Ruth and Red Grange were found in the sports sections, national air races were front page news. The superstar of this heroic sport was Jimmy Doolittle. He is the only man ever to win all three of the most coveted prizes in aerial racing-the Schneider Trophy Race for seaplanes, the Bendix Trophy Race, and the Thompson Trophy Race.

Doolittle's victory in the 1932 Thompson came in the most famous and ultra dangerous of race planes, the Gee Bee it-l. With its stubby, barrel shape and tiny fins, it "flew like a bullet!"

After his historic Japanese raid at the onset of World War II, Doolittle went on to distinguish himself as a Commanding General in various locations around the globe. Following his military service, he served on the Boards of Directors of a number of major U.S. corporations.

Today at age 92, Jimmy Doolittle is as vibrant and vigorous as ever. Heroes of his stature are hard to come by. He will always be cherished as Aviator Number One by all Americans.