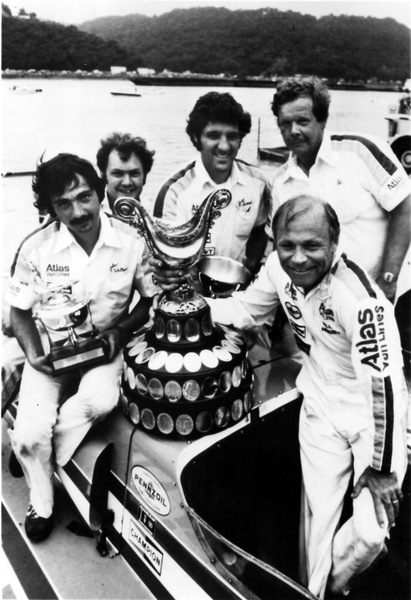 By the end of his 31 years of hydroplane racing, Bill Muncey, of La Mesa, California, came to define high-speed boat racing. No man had ever gone so fast, so consistently, and for so long.

Muncey won his first championship at the prestigious Gold Cup race at Detroit in 1956 driving the first of his three Miss Thriftway boats. By 1981, his final year of racing, he'd notched an amazing total of 62 career victories. Along the way he'd also picked up a record number of titles--eight Gold Cups, seven National Championships and four World Championships.

Muncey was a fierce competitor and the man to beat in every race he entered. Between 1960 and 1963 he won 14 races, including a string of six victories in seven races entered in 1962. At the age of 48, in 1978, Muncey tore the circuit apart by winning five races in the legendary Pay 'N Pak boat, which retired that year as the most successful thunderboat in history with 17 victories.

The following year, Muncey joined the Atlas Van Lines racing team. Previously, in 1972, driving Atlas Van Lines V, he'd won all the titles on the circuit and put together another of his patented six wins in seven races. Muncey continued his winning ways driving the Atlas Van Lines boat to two Gold Cups and a National Crown in the next three years.

No one had to tell Bill Muncey about danger. He often pushed his boats to the ragged edge and lived through two crashes to prove it. But in 1981, at the age of 52, Muncey's boat crashed at 175 mph during a race in Mexico and fate caught up with him. At the time of the fatal crash, he was characteristically storming out in front of the pack in the finals of the World Championship. To many, Muncey died the way he lived, a true champion.