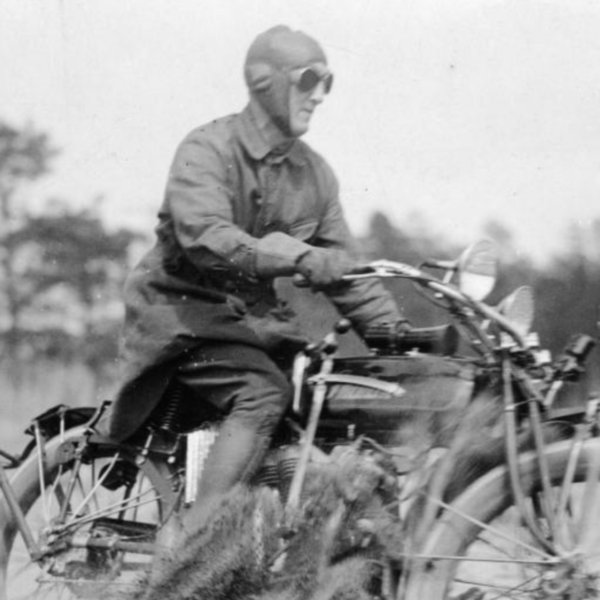 While the list of inaugural inductees into the Motorsports Hall of Fame is rich in achievements, only one member has inspired a national coast-to-coast speed run. Held five times between 1971 and 1979, the Cannon Ball Baker Sea to Shining Sea Memorial Trophy Dash between New York City and Redondo Beach, California, eventually produced a coast-to-coast record of 33 hours and fodder for six movies.

Nevertheless, Baker's exploits in the business of point-to-point racing remain noteworthy to this day. A pioneer motorcyclist in the early part of the century, Baker became known as the "Barney Oldfield of Motorcycle Racing."

As his talent for covering long distances in short periods of time developed, that nickname was soon amended to "King of the Road" and Baker went on to set hundreds of speed records on public roads.

Baker's first coast-to-coast record was set in 1915 on an Indian motorcycle. Although there was nothing that could be called a national highway system, Baker rode across the continent in 11 days, 12 hours and 10 minutes.

As roads and machinery improved, Baker, and others, kept whittling away at the coast-to-coast mark piloting both motorcycles and automobiles. His final continent spanning run for an official record in 1933 was an astonishing 53 hours and 30 minutes at the wheel of a Graham automobile.

Because of his flamboyantly successful promotions of automobile products in performance runs, Baker is remembered by many as perhaps the greatest pure stock car driver who ever lived. He capped his career in the infancy of NASCAR as its first commissioner.

Baker's first love was always the motorcycle. A little known fact is that he won the first event ever run at the Indianapolis Motor Speedway - a ten-mile motorcycle dash in August of 1909. In his last transcontinental crossing in 1941, Cannon Ball piloted a motorcycle for an unofficial record at the age of 59.

Legends are difficult to document. A writer of fiction would be hard pressed to create a character as colorful and whose achievements are so numerous and diverse. In the American lore of Roaring Twenties bravado, mud-splattered determination over horse tracks and country roads and the relentless quest for new records, none will ever compare to the one and only Cannon Ball.