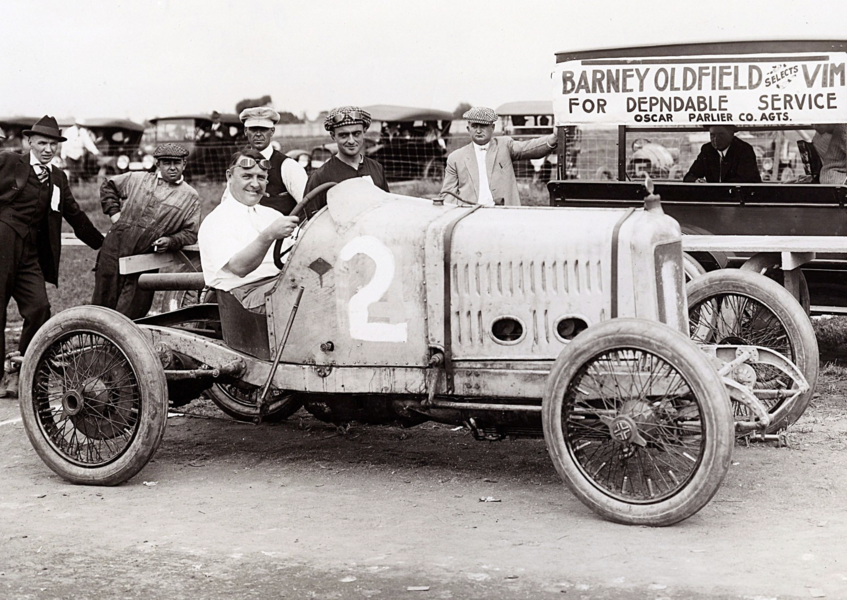 Although Barney Oldfield retired from active competition while motorsports was still in its infancy, his achievements and his colorful style combined to make him the spiritual father of American racing.

Born Bernard Eli Oldfield on June 3, 1878 in Wauseon, Ohio, this Motorsports Hall of Fame inaugural inductee began his racing career on bicycles, becoming a works racer with the Stearns factory in 1896. His first exposure to motorsports came in 1902, when an acquaintance loaned him a motorcycle for a race in Salt Lake City.

That same year he went to Detroit, where he participated in the development of Henry Ford's famous 999 racer, eventually driving it to victory against, among others, Alexander Winton, the American champion of the day.

Oldfield went on to attack the mile-a-minute barrier, eventually whittling it down to 0:55.8 seconds, which was good enough to land a job with Winton, and his career as a barnstorming race driver was established.

Oldfield attracted national attention with his national match racing against all comers in the fabled Peerless Green Dragon. In the course of an 18-week tour that hit 20 tracks nationwide, Oldfield, clad in a green leather driving suit, went 16-for 16 against local opposition and perfected his skill as a showman.

Though his flair for showmanship kept him in almost constant hot water with the AAA, America's major race sanctioning body in those days, Oldfield did manage to make occasional record runs, and in 1910 broke all existing marks for the mile, two miles and the flying kilometer, hitting 131.724 mph in the famed 200-horsepower Blitzen Benz.

Oldfield had little luck with America's premier race, the Indianapolis 500. His best finishes were fifth places in 1914 and 1916, the former in a Stutz, the latter in a Delage. However, he did run the first 100 mph lap at Indy, driving a front-drive Christie, and also came home first in the backbreaking Cactus Derby of 1914, a 670-mile run between Phoenix and L.A.

In all, Oldfield drove for Mercer, Stutz, Maxwell, Delage, Peugeot and ended his career almost as colorfully as he had begun, in the Golden Submarine, another barnstorming campaign that helped put a national tire and rubber company on the American corporate map.