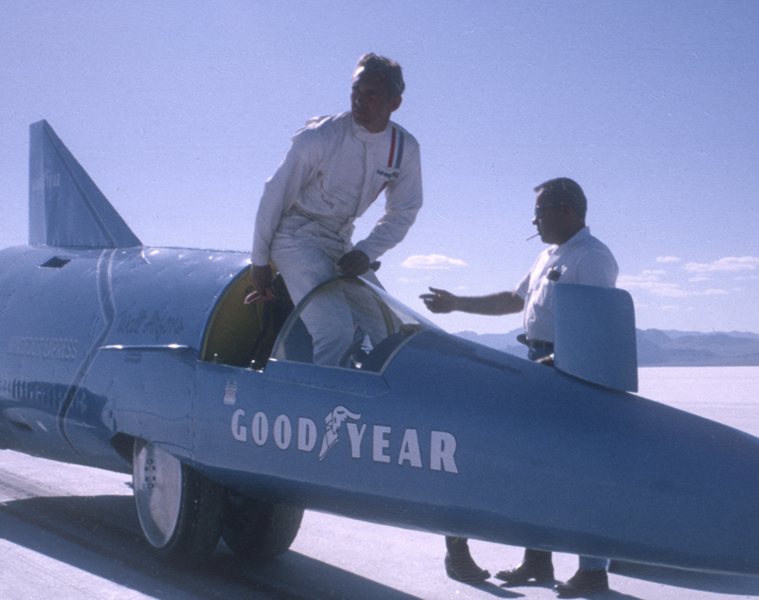 Although he is he is known for setting the unlimited Land Speed Record three times, Art Arfons made significant contributions to drag racing, tractor pulling and powerboat racing during a five decade career. At age 65, Arfons is the oldest active driver ever inducted into the Motorsports Hall of Fame.

Together with his stepbrother, Walt Arfons, Art pioneered the use of World War II aircraft powerplants in race cars. When the original NHRA Safety Safari toured the Midwest in 1953, Art stunned the visiting Californians with a world-record speed of 144 mph from his 6-wheeled, 12-cylinder, rearengined Allison dragster. That same season, an Illinois promoter promised $500 for an appearance. Since he didn't own a trailer. Art flat-towed the Green Monster more than 300 miles from his native Akron, Ohio, and collected the first significant appearance money ever paid to a drag racer.

Arfons built a dozen Monsters in the 50's, all powered by Allison, Ranger or Roll-Royce piston enginesincluding drag racing's first "sidewinder" (1955). It was during this innovative era that Art contributed two important safety devices since made mandatory for drag cars: the overhead roll cage (1954) and the parachute (early 1959). He also set Top Speed at the National Championships three years in a row, climaxed by blazing runs of 172 and 170 mph at the '59 eventafter which NHRA permanently banned aircraft powerplants.

Meanwhile, surplus jet engines were beginning to trickle clown to civilian enthusiasts. In 1962 at Bonneville, Art's first jet dragster topped 342 mphthe fastest run ever recorded by an opencockpit vehicle. From 1963 - 1965, he staged an ongoing Bonneville battle with Craig Breedlove that saw the LSR change hands six times. Arfons ultimately upped his average to 576.553, only to watch Breedlove raise the mark to 600.601. Ten days later, Art was timed at 615 mph before losing a wheel and surviving one of the most violent crashes in motorsports history.

In the 1970's and 1980's, Arfons influenced tractor pulls much as he had drag races and Bonneville contests during the previous two decades. His name and innovations have spurred pullings evolution into a major spectator sport.

In the fall before his induction, this legendary designer, builder and driver returned to Bonneville after 24 years away. His completely homemade, 2000-pound Green Monster 27 was gunning for the record vice again. When severe vibrations restricted the oldest man and the lightest vehicle ever to make an attempt to "only" 338 mph, Art Arfons announced his retirement from the salt.