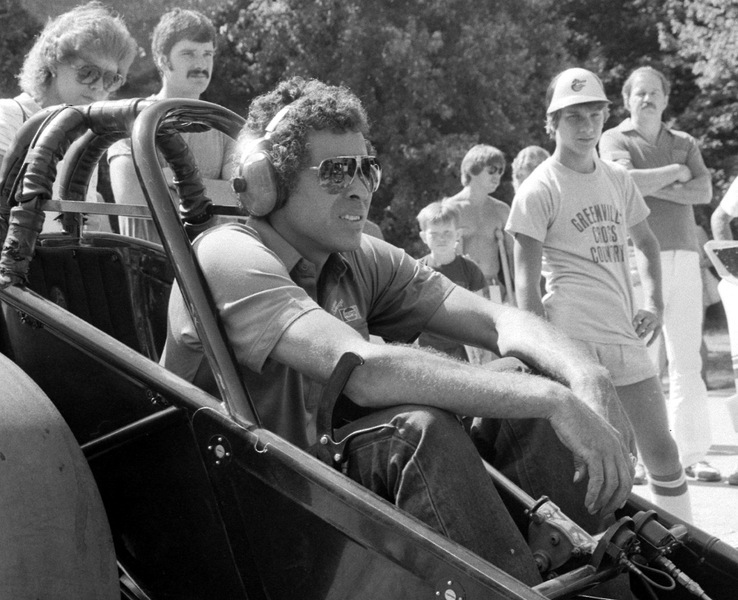 At the time of his induction into the Motorsports Hall of Fame of America, Don Prudhomme's racing career had traveled full circle. His enshrinement came midway through his 25th year of racing on the quarter mile sport's toughest and most professional circuit, the National Hot Rod Association. Prior to that he was the scourge of Southern California Top Fuel racing and the American Hot Rod Association trail. From Lions, San Fernando and Half Moon Bay in California to New York National Speedway, all long since closed, Prudhomme was the man to beat, and few were capable of doing so.

First achieving national prominence with a victory at the prestigious "March Meet" in Bakersfield, California, he won so often, and was so devastatingly quick on the starting line, that he was quickly tabbed with "The Snake" moniker, a name that he continues to earn to this date.

Apparently destined for a career as a custom car painter before discovering the thrills of drag racing, Prudhomme has long been one of the sports entrepreneurial geniuses. Capitalizing on his personal popularity and the audience appeal of his friendly rivalry with Tom "The Mongoose" McEwen, Prudhomme attracted new sponsorship and media attention to a sport which was experiencing considerable growing pains. Without doubt, his infusion of professionalism helped boost drag racing toward the respected position it now holds in American motorsports.

Beginning with a victory in the 1965 NHRA Winter Nationals, Prudhomme added six more Top Fuel wins to his early career total. After vacillating between classes for a year of two, by 1973, he was a confirmed Funny Car driver, and his competition knew it. It was the worst news they could imagine, with Prudhomme making their nightmares a reality when he achieved the first of his unprecedented four consecutive NHRA World Championships in 1975. He started his string with an astonishing six national event wins in one season, then topped his own record with seven wins in 1976.

Away from the track, Prudhomme was named six times each to auto racing's All America Team and as Funny Car driver of the year. Named Man of the Year by Car Craft Magazine in 1974, two years later Prudhomme received the "Ollie" Award, emblematic of a drag racer's career-long contributions to the sport.

Returning to the tough Top-Fuel division the year before his induction, Prudhomme courageously weathered terrifying shake-down accidents before taking his accustomed position near the top of the national rankings. Beyond question, Don Prudhomme's intangible mix of charisma, innovation, skill and daring transcends the 1320 feet of concrete and asphalt upon which he races. It has elevated him to a well-deserved place in the Motorsports Hall of Fame of America.