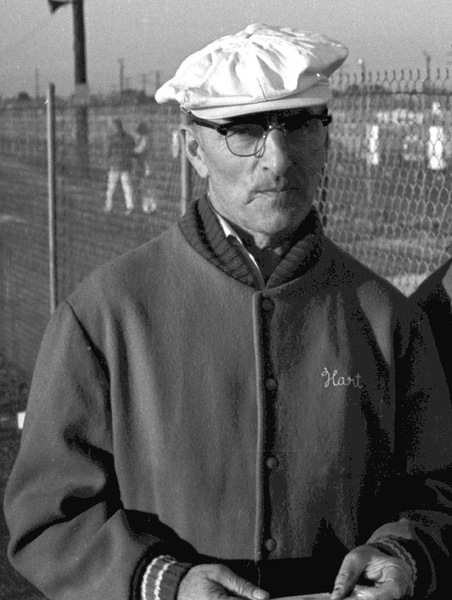 Drag racing is the only sport whose creation was inspired by a bayonet. And C. J. "Pappy" Hart was there the day the Marines landed in Orange County, CA.

In the late 1940s, hot rodders gravitated to the vast California airstrips built by the military during World War II, then abandoned. Mile Square had been a Navy facility, code-named for its square mile of concrete paving. On weekends, Hart and his pals showed up with stripped-down coupes and roadsters to race across the flat, unobstructed surface. "We used to run off seven, eight abreast," he remembers, chuckling. "With that many cars running, you'd have to beat somebody!"

One Sunday morning, the racers were routed by a company of U.S. Marines with fixed bayonets. Hart's buddies went back to the street; and he went looking for another place to race. The manager of Orange County (now John Wayne) Airport offered an unused landing strip, provided that Hart pay the airport 10% of the proceeds and secure insurance. With less than $1,000, Hart, his late wife, Peggy, and two backers opened Santa Ana Drags on June 19, 1950. Admission was 50 cents, race or watch. Unknowingly, Hart was creating a major American motorsport.

Evolution occurred quickly at Santa Ana. Initially, any number of cars would simply accelerate from a rolling start as far as their owners dared. Thus, one of the first issues to be addressed was track length. "There was a lot of talk in those days that quarter horses were faster than cars," explains Hart, who borrowed the distance from thoroughbred racing. Because the general public could relate to quarter-mile times, Hart shrewdly calculated that adopting this distance would fuel publicity about - and acceptance of - his motorized quarter-mile. A stopwatch soon gave way to homemade electric timers.

Necessity was the mother of classification. At first, Pappy segregated his "stockers" according to manufacturer axle ratio, vehicle year and engine displacement. When dry-lakes racers began showing up with modified machinery, he added "hot-car" classes, along with drag racing's first cash awards. His "Dollar-A-Mile" program paid the Top Eliminator $1 for each mph in the final round.

By 1959, when Hart lost his airport least, Santa Ana had been featured in a Life magazine cover story and become the model for drag strips everywhere. Pappy eventually resurfaced as manager of the legendary Lions Drag Strip (1965-71), then served as a hands-on consultant to various race tracks and sanctioning bodies. As recently as 1998, he was touring the nation with NHRA's Safety Safari. Now 88, Cloyce J. Hart is newly retired in Lake Elsinore, CA.