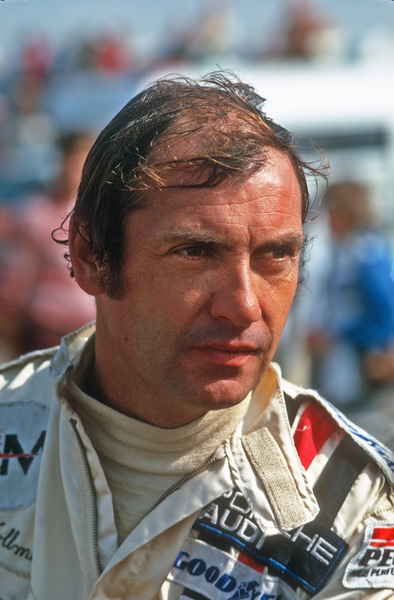 Forceful George Follmer -- a contender in any kind of racing he tried and a winner in most - was Trans-Am champion twice and one of only seven Can-Am kings.

Born in 1934, this Californian didn't start driving competitively until he was 25, when he and his Volkswagen took up autocross. Moving on to sports cars, he turned pro in 1965 - and promptly won the SCCA's United States Road Racing Championship. He did it in the California hot rod tradition; with a small-bore special he helped build. It was a tiny English Lotus 23 powered by a German Porsche engine.

Follmer then moved on to bigger iron: Can-Am, Indy cars, Trans-Am, Formula 5000, NASCAR and even Formula One.

In 1969 he took his first victories in both Trans-Am, as a Ford factory driver in a Bud Moore Mustang, and Indy car, in a Gilbert-Chevrolet. Follmer helped Ford to the Trans-Am championship with a 1970 win. The same year, he tallied two F5000 scores in a Lotus-Ford.

In 1971, driving a Moore Mustang before switching to an AMC Javelin fielded by Roy Woods, he won three more Trans-Am races. That same season, Follmer the road racer also captured a first-place trophy in a NASCAR Sportsman race. In 1972 he used a Woods Javelin to add four more Trans-Am victories and earn his first series championship. It was AMC's second title.

Only days after clinching that title, Follmer got a call from Roger Penske. Could he come to the Road Atlanta Can-Am to replace the injured Mark Donohue in the powerful, turbo-charged Porsche "Panzer?"

Win he did, five times in the eight races he ran for the team in '72, and the Can-Am cup went up on his shelf next to his brand-new Trans-Am trophy. The following year, now with a privateer team, he drove the same car to one more Can-Am victory.

Follmer debuted in Formula 1 in 1973. In his first F1 race, driving American Don Nichols' Shadow-Ford, he came home sixth - thus earning a world championship point. He placed third with a coveted spot on the podium in his next grand prix. The rest of the international season brought less success and Follmer resumed his U.S. career.

Back in Trans-Am, he drove a Porsche to clinch his second championship 1976. In the Can-Am, he took one 1978 victory with a Prophet-Chevy. Leg injuries suffered later that season in the same car effectively ended his professional career.

Nowadays he keeps busy off-track with various commercial ventures as well as his immaculately maintained Piper Arrow place. But anyone who watches him in his frequent vintage event appearances knows that in a race car, George Follmer is as forceful as ever.