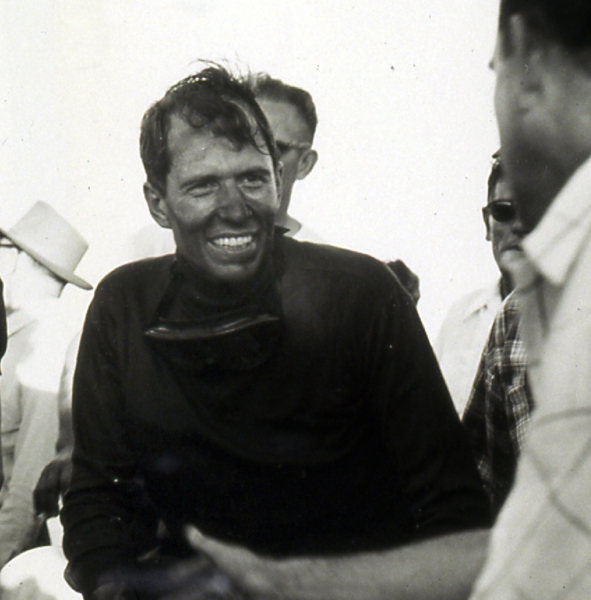 John Cooper Fitch was already a decorated World War II fighter and bomber pilot, and ex-POW, when he started racing after World War II. He was the Sports Car Club of America's first national champion, in 1951. He raced MG, Allard, Sunbeam and Jaguar cars. He also raced specials of his own design, and he raced for the legendary American sportsman Briggs Cunningham and won the Argentine Grand Prix. Then, in 1952, he caught the attention of Mercedes-Benz racing boss Alfred Neubauer, who offered him a test drive in a factory race car. Fitch's exploits as a Mercedes-Benz team driver with the likes of Stirling Moss, Karl Kling, and Juan Manuel Fangio are legendary.

It was Fitch who convinced Neubauer that there was still time in the 1952 season to run the Carrera Panamericana, 2000 miles of racing over almost a week of race days. The Mercedes-Benz team went, in force, and they finished first, second and fourth overall, racing in the prototype sports cars that led to the development of the 300 SL Gullwing and roadster. Together, they won the sports car championship of the world in their first full season since the war.

Fitch's finest moment with Mercedes-Benz came in 1955 at the Mille Miglia, where Stirling Moss won overall, followed by Fangio, with Fitch coming in an astonishing fifth overall and first in the GT class with a basically stock 300 SL Gullwing, a feat of driving still regarded by many as one of the greatest performances of all time.

When Mercedes-Benz left racing in 1955 after the tragedy at Le Mans, Fitch was picked by GM to manage the then-new Chevrolet Corvette racing team, and drive for the team, which he did, right on through the 1960 season. He continued to freelance with Cunningham Jaguars and Maseratis, and took time out to help design and later manage the Lime Rock Park racetrack in Connecticut. Fitch continued to race in Corvette, Jaguar, Maserati, Porsche, Lister, and Cooper race cars right through the 1966 Sebring race, after which he chose to retire from driving.

Fitch has spent the 40 years since profitably, inventing highway and race track safety systems, including the ubiquitous orange plastic highway construction barrel. He also built and sold modified Corvairs, and built a Corvair-based car of his own design, the Fitch Phoenix, which is still his daily driver 40 years later. He holds a number of patents for safety equipment including soft walls and sliding barriers for race tracks, and a shelf full of safety awards.

And he is still racing. He has been to the Bonneville Salt flats twice in the last four years with a Mercedes-Benz Gullwing coupe, attempting to break the record in the F/GT class for sports cars with unmodified bodies and modified engines. Each time he goes to Bonneville, he resets his own record as the oldest man ever to attempt a record on the salt. He's also done the Monterey Historics, the Mile Miglia, the Goodwood Festival of Speed, and the Lime Rock vintage weekend in his retirement.