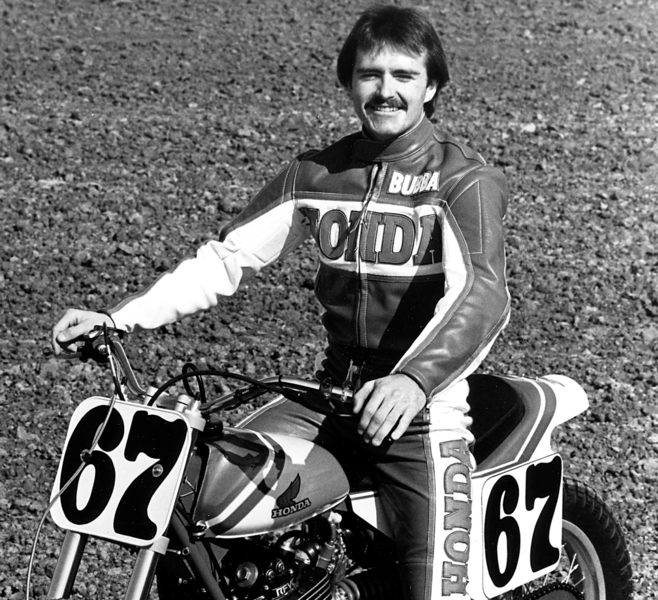 It was Bubba Shobert, then a multi-time racing champion, who introduced me to Interstate motor home travel without a right side mirror. It's a long story but the key to this transportation feat is simple confidence, gas it and go. Thus our bus trip was a microcosm of Bub's approach to racing.

Gas it and go is the creed of the dirt track motorcycle racer, a tougher-than-leather breed of go-faster required to steer it with the throttle through a face-full of roost. Bubba was a teenaged Texan, barely as tall as his motorcycle, when he arrived on the Camel Pro Series national tour, but his education on the rugged short tracks of the Lone Star State left his chin sticking out just far enough to remind his peers that he wouldn't be backing down from anybody. He was rookie of the year in 1980.

Hugely talented, Bubba was destined to star on the short-lived Honda dirt track team and from 1985 to 1987 he owned the sport, winning an amazing 20 races and three straight championships. But in the finest gas-it-and-go fashion, he was also looking for his next challenge.

That came in the form of road racing, once a part of the AMA Grand National tour but by the mid-80s a separate and highly-specialized series in which Honda was a major force. Bubba wanted a pavement racing shot and proved he deserved it in 1984 when, with virtually no experience, he won the Formula One race on the slippery and tricky Mid-Ohio circuit – in a pouring rain! (The explanation you're looking for is his phenomenal natural talent!)

Added to his comprehensive dirt track stats, that win was of great historical significance, placing Bubba among the handful of riders to score the AMA "Grand Slam," a winner in short track, half-mile, mile, TT and road racing. More to the point, it also convinced Honda of his pavement future and in 1988 he validated their confidence by winning the AMA Superbike Championship. Amazingly, Shobert continued to dirt track while pursuing the road race crown, finishing second to Scott Parker in the '88 title chase.

In part because he was such a quick study, Honda decided the following year to give Bubba a shot at the ultimate road racing achievement, a Grand Prix road racing career. The result was a disaster. In only his third GP, the U.S. round at Laguna Seca, Bub was involved in a freak crash that left him with a serious head injury and ended his racing career.

The good news is that Bubba made a miraculous recovery and has gone on to live a full life, raising a motorcycling family and serving as a Honda spokesman. More than that, his fans remember him as one of the toughest competitors in AMA history, and they are well-pleased that, despite his career detour that horrendous day at Laguna Seca, Bubba Shobert's racing path has brought him to this reward, a well-deserved spot in the Motorsports Hall of Fame.