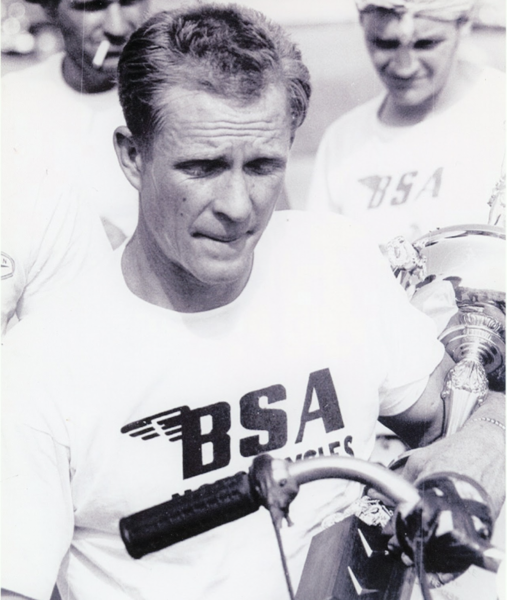 In an illustrious professional racing career that began in 1952 and spanned more than two decades, Dick Mann was a two-time Grand National Champion, garnering motorcycling's most prestigious Number One plate in 1963 and again in 1971. He was also the runner-up in the series three times, in 1959, 1964, and 1965. He was the first rider to win races in all five disciplines of Grand National competition - short track, half mile, mile, tourist trophy (TT), and road race.

Mann scored the first of his 24 Grand National wins in 1959 in the Peoria (Illinois) TT and 13 years later in 1972 captured his last National victory at the same track. Eight of his National wins came on TT tracks; only the late Steve Eklund, with nine victories, accumulated more TT wins than Mann.

Mann competed in his first Daytona 200 in 1955 on the beach and road course, where his best finishes were back-to-back runner-up performances aboard Harley-Davidsons in 1958 and 1959. The race moved to the then new Daytona International Speedway in 1961, but it wasn't until 1970 that Mann was able to score his first victory in the famed race. To cap that off, he returned to the Florida superspeedway the following year and won again. Both times out Mann established new speed records for the race. Mann, who competed in the Daytona 200 on seven different brands of motorcycles, won the 1970 Daytona 200 on a Honda and the 1971 running on a BSA. Fittingly, he scored National wins on five different brands of motorcycles - Matchless, BSA, Yamaha, Ossa, and Honda.

Mann last competed as a professional in 1974, but to this day says he didn't retire. "I never retired. I kept looking for a good ride but couldn't come up with one so I would tell everyone I was out of work," Mann said. Following his "retirement" from professional racing, Mann continued to compete. He participated in the 1975 International Six Days Trial, the Olympics of sportsman motorcycle competition, and earned a bronze medal in the off-road event which was held on the Isle of Man off the coast of England.

Mann, who recently moved to the Lake Tahoe area of Nevada from his longtime home in the San Francisco Bay area, remains active in classic bike racing. Along with his wife Kay, he competes in and promotes American Historical Motorcycle Racing Association motocross events.