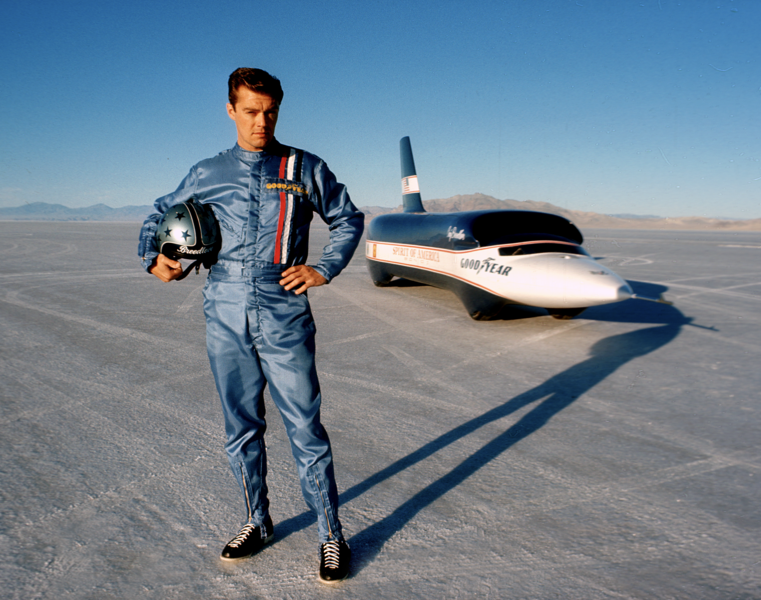 His fascination with aircraft and hot rods intensified with age. By the late 1950s, Craig had stepped into bellytank streamliners and dragsters, continuing to set records at local dry lakes and drag strips. In 1960, Breedlove began planning an American assault on Englishman John Cobb's long-standing (1947) Land Speed Record of 394 mph.

Craig originally designed a four-wheeled vehicle, only to learn that FIA offered no class for jet cars. Since FIM sanctioned a motorcycle class for thrust-powered three-wheelers, Breedlove modified his plans for "Spirit of America" -- a controversial creation more like a fighter plane than any land-based vehicle ever seen. (Among other innovations, Spirit carried what is believed to be the first data recorder ever used in motorsports.)

In 1962, Spirit returned the unlimited Land Speed Record to America with a two-way average of 407.45 mph on August 5,1963. Breedlove's Goodyear-backed effort ignited an intense "tire war" with the Firestone-sponsored Arfons brothers that would see the LSR change hands six times in three years.

Returning in 1964, Breedlove became the first person to reach 500 mph on wheels, yet briefly lost the record to Art Arfons. Craig recaptured the LSR at 526.277 mph, but nearly drowned on the record setting return lap. After shredding both parachutes and burning up the brakes at 500-plus, Spirit roared past Bonneville's braking area, shattered a telephone pole, and splashed nose first into a canal. History's fastest vehicle was damaged beyond repair. Days later, Breedlove lost the record to Arfons.

A six-month crash program produced an all-new, four-wheeled "Spirit of America -- Sonic I" in time for Bonneville's 1965 season. Two wild weeks in November saw Craig regain the LSR at 555.127 mph; lose it to Arfons (576.553); then win it back with history's first 600 mph Land Speed Record (600.601). Breedlove's final LSR would endure for five years before Gary Gabelich averaged 622.407 with rocket power.

Craig returned in the late 1960's to break various production car records for American Motors. During 1974, he campaigned a rocket-propelled three-wheeler at drag strips. After setting FIM quarter mile records of 377 mph and 4.65 seconds e.t. with the rocket at Bonneville, he retired.

Now in his fifties, Breedlove seems determined to wrest one more Land Speed Record (633 mph) from another Englishman (Richard Noble). In fact, a five-wheeled jet car -- equipped with 20,000 pounds of thrust -- is now taking shape at the Spirit of America team facility in Rio Vista, California. If sponsors continue to climb aboard, the first man to push the Land Speed Record past 400, 500 and 600 miles per hour could be aiming for 700 and the sound barrier.