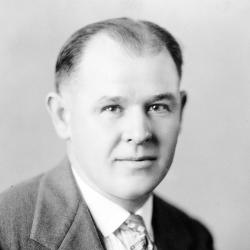 It is not too much to say that Fred Offenhauser shaped American open-wheel racing for nearly half of the Twentieth Century. In 1932 he encouraged Harry Miller to build a 255 cubic inch, four-cylinder racing engine. The powerplant outlived Miller's bankruptcy and went on, in various forms, to win the Indianapolis 500 30 times, twice the Miller nameplates and 28 times with Offenhsauser identification.

Offenhauser was born in Los Angeles in 1888 and became a toolmaking machinist with Pacific Electric Railway. In 1913, he went to work for Harry A. Miller, a successful manufacturer of carburetors.

Offenhauser helped Miller turn a flood of ideas for racing engines into metal - engines that began to win races. In 1922, an eight-cylinder Miller engine won the Indianapolis 500, as Millers would for nine out of the next 12 years.

Miller lost his business in 1933 and Offenhauser took part of the 18 months in back wages he was owed in the form of machinery, patterns and parts, setting up shop just around the corner from the Miller plant in LA and made parts for the Miller 255.

In 1934, to meet the demand for a reliable engine for the new sport of midget racing, Offenhauser had Leo Goosen draw up a much smaller version of the 255. Quickly dubbed "The Mighty Midget," that engine came to dominate midget racing until the rules changed in the 1960s. Fred put his stamp on the big 255 and 270 engines in 1935 and Kelly Petillo won the Indy 500 that year with an Offenhauser.

After World War II, Fred sold the business to Lou Meyer and Dale Drake who carried on the Offy engine. Fred died on August 17, 1973. In May of the same year, Johnny Rutherford had put a turbo-Offy on the pole at Indy. Gordon Johncock won the race with another Offy. His engines would win three more 500s before the turbo boost rules brought an end to the Offenhauser dynasty.