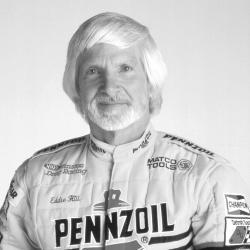 Eddie "The Thrill" Hill first scored in drag racing during its formative years, but stepped aside after a major fire in the mid-60s. Turning his attention to motorcycle racing - he'd opened a dealership to occupy his time - he quickly rose to the top by building his own bike and thumping the factory riders with it. When that paled he tried boat drag racing, and within a relatively short time had set a speed mark that would stand for more than a decade. Then came another one of those "incidents" so Hill hung up his racing togs and got back into the business world.

Bored again he returned to land-based drag racing, and it was in this arena that he would earn world-wide acclaim. During his most-active years, Hill scored just one championship while winning 15 NHRA races. He still holds the mark for being the oldest Top Fuel winner in history when he won the '96 Mile-High Nationals at the tender age of 60.

On April 9, 1988 he drove his dragster to the sport's first four-second elapsed time (4.998, to be exact), forever changing the face of the sport.

Hill may actually be more well known for the twin-engined dragster with the four racing slicks that he ran in the early 60s, or the Top Fuel hydro he drove to a place in the Guinness Book of World Records with a speed of 229 MPH in 1982.

Hill is much more than just the machines he's driven. He's a master mechanic and tuner, a point proven over and over again in each of his racing personas. Whether it had two wheels or four, spun tires or a propeller, Hill was responsible for its performance, which always set standards others could only hope to equal.