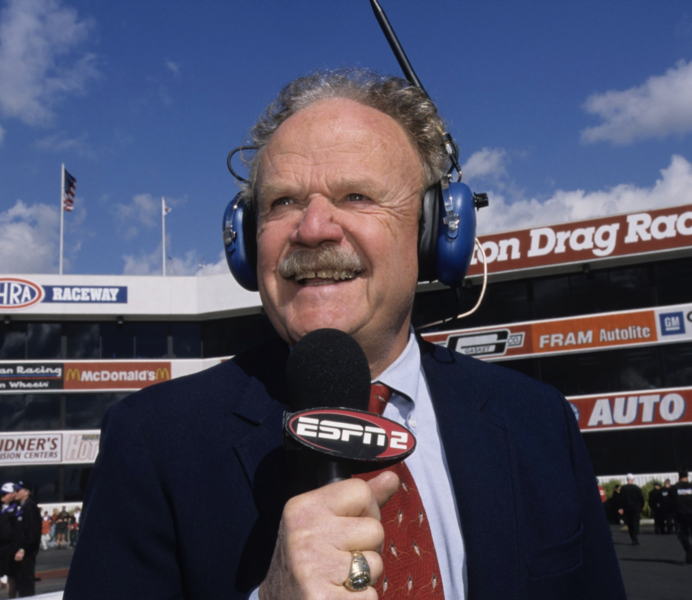 Most Hall of Fame biographies are pretty cut and dried.  They include an outline of the individual’s accomplishments, usually written by someone who may have only witnessed a small portion of that career, but this one will be a bit more personal because I’ve been fortunate to have heard Dave McClelland since a race in Louisiana in 1964. I had no clue who was calling the event, only that he was pretty good. By the time McClelland called it a career the accolades included “none better,” “unmatched,” “the best announcer and television commentator ever” and more. If there is one voice that will be forever associated with drag racing, it’s McClelland’s.

Right now there are people wondering how an announcer has achieved Hall of Fame status. If McClelland were merely a microphone jockey, those questions might have validity, but he’s meant much more to the sport. His commitment to his craft has always been paramount. When McClelland said something over a track’s PA system or into a television network’s microphone he was imparting the kind of personal information that made the men and women in control of 330 MPH machines come alive for both the neophyte and experienced fan.

McClelland turned his interest in drag racing into the real thing by racing his own car, an old Fiat Altered. It wasn’t a thing of beauty, but Big Mac didn’t care, he was having fun. Most importantly, personal involvement gave him a better understanding of what racers were going through, and that knowledge impacted his reporting. When he said a Top Fuel car had dropped a cylinder, a big screen replay would show you exactly that – and he’d called it long before you realized it had happened.

Mac’s knowledge resulted in his being sought after by drag racing’s leadership. They realized he was someone whose counsel would be worth hearing – even if they ignored his suggestions. Big Mac also mentored and advised a number of competitors, sometimes with unappreciated candor. When a car owner would complain about the costs of competing, McClelland never hesitated. “That Funny Car too expensive? Get a Comp car. Still too much? Get a Super Stock or Stocker. Can’t afford that? Build a bracket car. Can’t manage that either? Pull the hubcaps off your car and go grudge racing on Friday nights. It’s still drag racing, no matter how slow or fast it might be.” I heard Mac say that numerous times and never once saw a competitor walk away angry, because Mac’s honesty had given them something to think about.

In 1994 McClelland was the recipient of The Ollie Award at the All-Star Drag Racing Team ceremony, the honor representative of “an individual’s career-long contributions to drag racing.” He was honored again in 2005 by the International Drag Racing Hall of Fame with the Founders Award, yet another symbol of his decades-long contributions. If you know Big Mac, you know those honors, along with the many others he’s received over the years, have left him somewhat embarrassed. Dave McClelland has always been all about drag racing, and if his words and deeds have inspired just a few people to become fans or competitors, that’s good enough for him.