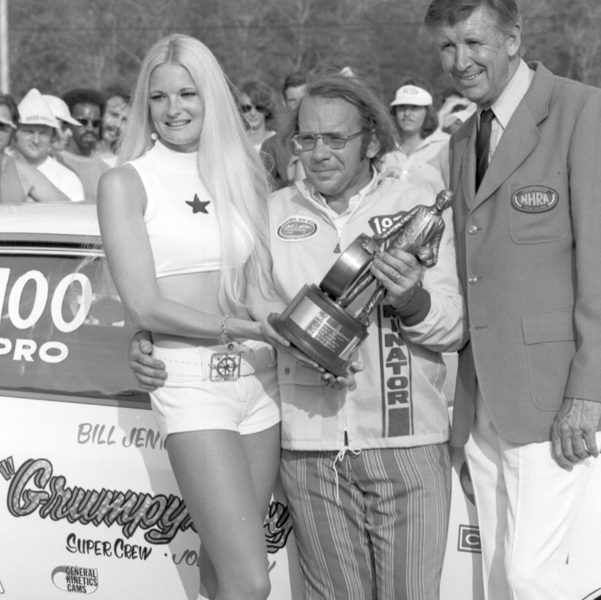 The sophisticated competition in NHRA's Pro Stock category is reflective of the tremendous amount of science and technology that have been invested in the sport. Today's Pro Stock engines, which produce in excess of two horsepower per cubic inch on gasoline-without the assistance of fuel injection, turbocharging or supercharging-are regarded as the most efficient of their type in motorsports.

Much of this can be attributed to the career efforts of Bill "Grumpy" Jenkins, whose then-innovative use of his mechanical engineering skills in the mid-1950s not only produced many of drag racing's most successful vehicles, but also helped rid the sport of its former leather jacket-illegal street racing image.

While he prefers to regard his greatest achievements originated with engine building and related research and development work, Jenkins earned a considerable reputation as a driver, winning a combined total of 13 NHRA national Pro Stock events from 1965 to 1975. With the bulk of his driving career taking place before the era of clutchless planetary gear transmissions, Jenkins achieved most of his wins with a manually shifted four-speed transmission, recording an incredible streak of over 250 runs without missing a shift in 1972.

Beginning in Berwyn, Pennsylvania, Jenkins utilized the skills he had developed from racing a 1955 Chevy convertible to develop a sizable collection of customers who eagerly capitalized on his knowledge and expertise. He gained considerable attention as the engine builder and tuner for Dave Stickler in the early 1960s, and won his first national event as a driver at the 1965 Winternationals. With the creation of his first "Grumpy's Toy," a 327-cid 1966 Chevy II that outran most of the country's swiftest 426 Hemi-powered Dodge and Plymouth entries, Jenkins was transformed from a cult icon to a national star within drag racing circles.

With a NHRA Nationals Super Stock victory in 1967, Jenkins became known as drag racing's premier builder of normally aspirated stock engines, and achieved even greater success when the new Pro Stock category was introduced in 1970. Driving a converted 1968 Camaro, Jenkins won the first two NHRA 1970 races, the Winternationals and the Gatornationals, before undergoing a losing streak when the Chrysler factory-backed Dodge and Plymouth entries, led by Sox & Martin, dominated the class. But Jenkins returned in 1972 with a revolutionary small-block Chevrolet Vega, constructed with the first Pro Stock tube chassis. After his upset opening victory at the 1972 Winternationals, Jenkins went on to win five of the eight remaining events that year, earning a then-incredible total of $250,000.

Jenkins earned the "Grumpy" moniker through his no-nonsense attitude at races, where his continual search for improved performance left little time for idle chatter with his racing colleagues. But if a man can be measured by the impact that his innovations have had in his chosen field, the career of Bill Jenkins speaks volumes.