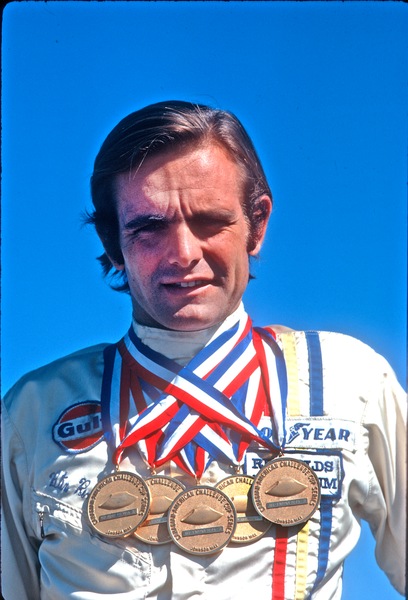 In a tough-hearted fraternity where nothing finally matters but results, Peter Revson made his own way on his own merit as a racer. "I really feel he was one of the top six drivers in F1," McLaren team manager Teddy Mayer once said to Autoweek; yes, he and Revson were long-time personal friends, but when it came to professional evaluation, Mayer was as coldly clinical as they come."

"Revvie," as friends, teammates and competitors all called him with genuine warmth, was born on February 27, 1939, to a co-founder of the cosmetics giant Revlon. He always downplayed the connection, and frequently bristled at inevitable media characterizations that he was a playboy heir to a great fortune.

He attended several Eastern prep schools and colleges, where he seemed mainly interested in sports, particularly football. While living in Hawaii in 1960, he bought a Morgan and entered some club events. He won his second race, but after his third the local organization banned him as "too aggressive." He kept right on racing, first with the SCCA on a national level, and then by moving to Europe in 1963 to pursue a serious professional career.

He did it in the time-honored European way, traveling and often sleeping in a converted bread van. The dashing young Yank soon drew the right kind of notice on the track, and by the end of the first year he'd been invited to show his ability in a Formula 1 car. In 1964, he raced a Lotus-BRM four times. Ford signed him to its GT40 team, and he also drove for Ford and later American Motors in the Trans-Am, taking two victories. He was in at the 1966 beginning of the Can-Am series, too.

The following year younger brother Douglas, also a racer, died in a crash in Denmark, but Peter remained dedicated to his career. Several impressive Can-Am seasons with Carroll Shelby and Lola importer Carl Haas led to Teddy Mayer's invitation to join the series-dominating McLaren team in 1971. Revson promptly won the Can-Am championship. But perhaps the widest recognition came at Indianapolis that same year, when this "rich kid from New York" was fastest qualifier; it was one of three poles and one outright victory (1969, Indianapolis Raceway Park, Repco-Brabham) on this versatile driver's Indycar resume.

Then, as now, F1 was a professional road racer's highest aspiration. After a drive for Tyrrell at Watkins Glen in 1971, Revson was named to the McLaren F1 team for '72. He scored his first pole position that year, and earned enough points to rank fifth in the world championship. In 1973, he took his first Grand Prix victories at Silverstone and Mosport, but wound up fifth in the championship again. The next year, Revson moved to Shadow. He lost his life on March 22, 1974, due to suspension failure while testing the F1 shadow at Kyalami in South Africa.