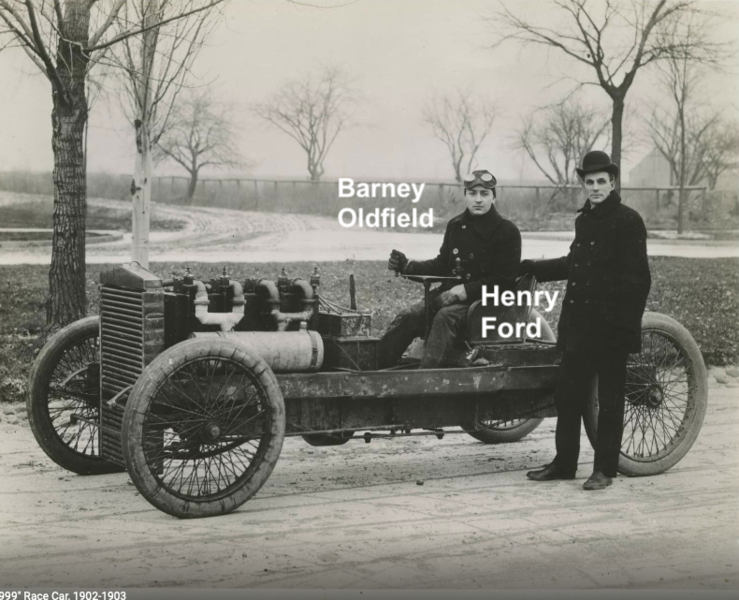 That commitment began with the entrepreneurial zeal of its founder, Henry Ford. In the earliest days of the automobile, many people worked on motor carriages, and a variety of trials, tests and races were held that attracted widespread attention. Ford noted the acclaim and enthusiasm automobiles brought, so he built his first cars to establish his name through motorsports. He also noted the prize money, sometimes as large as $10,000.

Oliver Barthel and Ford built a racer for the October 10, 1901, races sponsored by the Detroit Driving Club. When it came time for the feature, preliminary races had taken so much time that the main 25-lap race was shortened to just ten laps. To the starting line came three entrants: Henry Ford aboard his racer, the famed Alexander Winton on his and another driver who discovered a mechanical problem and withdrew. Ford had never raced before, but fortune was in his favor after Winton's machine began leaving a trail of smoke after three laps. Racing had indeed brought what he wanted-acclaim. But the experience was such that Ford retired as a competitive driver, saying, "Once is enough."

That success led to the formation of the Henry Ford Co. on November 30, 1901. The company didn't go in the direction Ford wanted, so he left to join forces with Tom Cooper, the foremost cyclist of the time, in building a much more aggressive racer, the 999. Because of its potential speed, Ford became concerned about his driver's safety. But he need not have been too concerned: his driver, 23-year-old Barney Oldfield, had already proven himself in bicycle racing. Oldfield practiced at Grosse Pointe the week before the occasion of the next race, the Manufacturer's Challenge Cup held October 25, 1902.

Four drivers started; again, the main opposition was Winton. Oldfield led from the start, as he opened up 999 and didn't let off. His lead grew to the point of lapping the two lagging cars, and Oldfield soundly beat Winton, who dropped out on the fourth lap. Ford's 999, with its 70, perhaps 80 horsepower, was described as "low, rakish, and makes more noise than a freight train." It was in that machine that two things happened: Oldfield made Ford famous and Ford made Oldfield famous. Both went on to become the most recognized figures in early motoring-Ford as a builder, Oldfield as a driver.

The excitement that Henry Ford's products generated became the source of explosive growth in motorsport throughout the 20th century. Today, Ford is the only automaker that can claim victory in the Indy 500, Daytona 500, 24 hours of LeMans and Daytona, 12 Hours of Sebring, the Monte Carlo Rallye and the Baja 1000. That commitment is certain to continue in the future, given Ford's ongoing, global support of virtually all forms of motorsport. Henry would certainly have been proud.