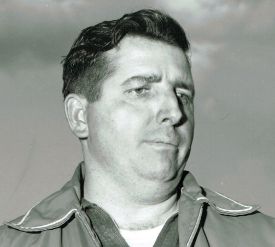 Marshall Teague owned a gas station in Daytona Beach and was interested in racing. If it sounds a bit like William H.G. France, you would be right. They were contemporaries and friendly rivals in the Florida east coast hamlet.

Their careers diverged in the ‘40s when France started to pay more attention to promoting races than being behind the wheel of a race car. It was “Big Bill” who co-founded NASCAR and built Daytona International Speedway to push the sport forward.

Teague was well-known in racing circles, but not a headliner outside the sport. He earned his reputation by embarrassing the GM, Ford and Chrysler teams that used -- and touted -- the virtues of their 8-cylinder engines. Teague campaigned a 6-cylinder Hudson. During the 1951 and ’52 NASCAR
Grand National Series, now known as the Sprint Cup Series, Teague’s “Fabulous Hudson Hornet” took part in 19 races and earned seven victories, including back to back triumphs on the Daytona Beach & Road Course.

Teague died in 1959 just as NASCAR was about to enter its first “golden era” of popularity. But in a striking testament to his contributions to the sport, the 2006 animated “Cars” movie featured a character based on Teague.  The wise Doc Hudson character, voiced by Paul Newman, explains to hotshot Lightning McQueen (Owen Wilson) that there is more to life than winning races and being
famous.

To keep the parallel going, Teague mentored many Daytona Beach racers and mechanics, including 1995 Hall of Fame inductee Fireball Roberts, who would become NASCAR’s first breakout personality. You might not follow international soccer, but you would know the name Pele.  You might not be interested in golf, but you know the name Arnold Palmer. Roberts was in that class, while Teague never enjoyed that status.

Teague took his talents to open-wheel racing after his NASCAR success. He was especially enamored with the Indianapolis 500. Teague made starts in 1953 and ’57, finishing seventh in the latter race. He drove the Sumar Special that day and continued to develop the machine with car owners Chapman Root and Donald Smith.

He was looking forward to driving one of the Sumars in the 1959 500.  In February, however, his attention was on the magical figure of 180 mph, which would break -- by 3 mph -- Tony Bettenhausen’s year-old closed course speed record at Monza. Teague felt Daytona’s new, smooth asphalt, along with its length and sweeping banks, were the perfect combination to top his Indy rival’s mark.

“Comparing Daytona to Monza is like comparing a highway to a country road,” said Teague, whose Daytona-styled Sumar was modified with fenders and a canopy roof. And that is where Teague’s life came to an end. On the third day of test runs, the car crashed as it entered Turn 1.  Roberts was found crying on the pit wall after news spread of Teague’s death.

“Marshall is the guy who started me out in racing,” he said of his friend. “Now he’s gone. There’s
nothing else to say.”

While Teague’s life ended, his contributions to the sport have lived on and for that reason he was part of NASCAR’s list of 50 greatest drivers of all-time released in 1998, in conjunction with the sanctioning body’s 50th anniversary.