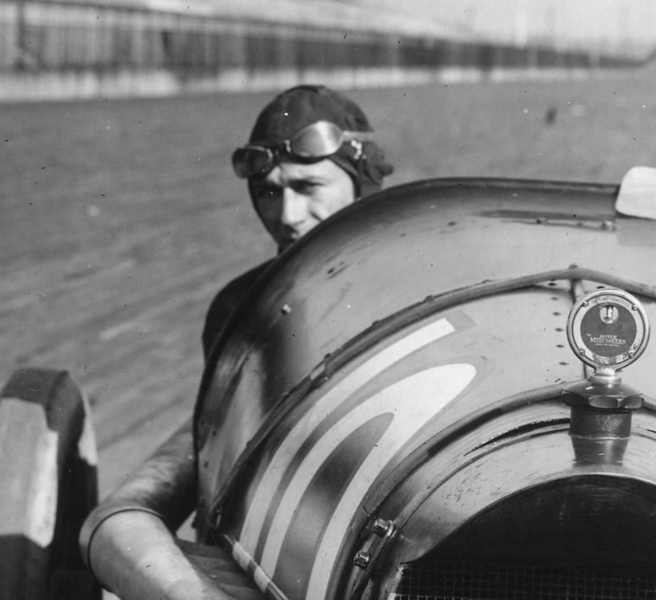 August Samuel Duesenberg was a German-born immigrant, who, along with older brother, Frederick, created some of the finest American-built racing cars of the 'teens and twenties, and co-founded the iconic firm which was to craft among the most elegant, beautifully-engineered and cherished passenger cars ever produced.

Duesenberg racing cars won early major races in the hands of Eddie Rickenbacker, Ralph Mulford, Tommy Milton, Roscoe Sarles, Eddie Hearne and others before Jimmy Murphy completely stunned the world by winning the 1921 French Grand Prix. Not only was this the first occasion on which an international Grand Prix had been won by an American driver at the wheel of an American-built car, but it has only been accomplished once since, 1991 inductee Dan Gurney winning the 1967 Belgian Grand Prix in his own Eagle-Weslake. The year before Murphy's GP win, Tommy Milton blasted over the sands of Daytona Beach with a massive "twin eight" Duesenberg to average over 156 mph for the flying mile. (It was not recognized as an official world record only because he'd not made the required return run within the hour.)

After Mercedes made history in 1923 by equipping its three-car Indianapolis 500 team with gear-driven superchargers, Fred and Augie developed a Rootes-type "blower" for three of their four 1924 entries. One of them, started by Lora Corum and taken over just past halfway by Joe Boyer, went on to win at over 98 mph. The following year, Peter DePaolo (with help from relief driver Norman Batten) was the first to complete the 500 miles in under five hours, averaging 101.13 MPH. DePaolo also won that year's AAA National championship for Duesenberg, winning five of 11 races.

By this time, the brothers were already into the luxury car business, but a series of events had led to them no longer being in control of the company they had founded. They were pretty much restricted to engineering duties and the running of the racing team, now located across from the Indianapolis factory, on the second floor of a building that had no elevator! Hardly convenient, they had to deal with temporarily removing bricks from the back wall and rolling the cars up or down a steep ramp.

After Fred succumbed to injuries sustained in an automobile accident in 1932, Augie was elevated to Duesenberg's chief engineer. But very much the pure enthusiast, the good-natured Augie was always engaged in interesting diversions such as building a trio of beefed-up chassis in the early 1930s to house Cummins Diesel truck engines for the "500" and working with Ab Jenkins to construct the massive Duesenberg-based "Mormon Meteor" which set numerous long-distance speed records at the Bonneville Salt Flats in the late 1930s.

It was rather ironic that a few blocks north of Augie, the equally accessible and down-to-Earth Arthur Chevrolet was operating the equivalent of a speed shop, and in many respects, the pair of them were basically "hot-rodders," a decade or two before that term came into use.

Augie eventually scaled back and moved about 15 miles southwest to rural Camby, Indiana where he passed away on January 18, 1955, smiling and waving to friends right up until the very end.

Raconteur Donald Davidson, Indianapolis Motor Speedway Historian since January 1998, has contributed to numerous books, written hundreds of magazine articles and has been heard on every Indianapolis 500 Radio Network broadcast since 1964.