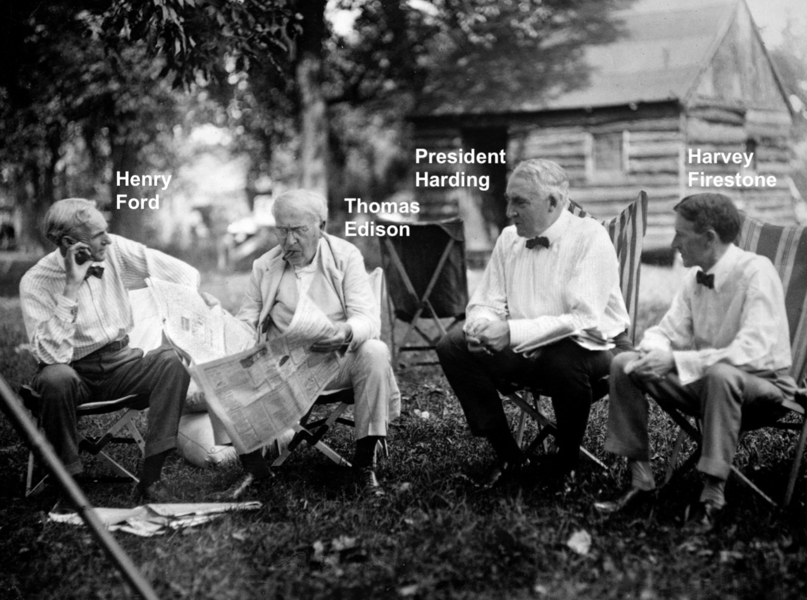 Harvey S. Firestone was a man of simple roots whose vision and entrepreneurial spirit enabled him to take advantage of the early 20th century emergence of the automotive industry to build a global enterprise bearing his name.

Firestone was born on a farm near Columbiana, Ohio, in 1868. After completing high school, he moved to Detroit as district manager of a buggy company. He often rode around in one of the city's first rubber-tired carriages. While in Detroit, he sold a set of tires to another young automotive enthusiast named Henry Ford, a machinist who was beginning to experiment with gasoline engines and who would later become a valued business associate and close friend. Firestone left the buggy company in 1896 and went to Chicago where he bought a downtown tire shop. He was approached several years later to sell his shop at an attractive price.

In 1900, Harvey relocated to Akron, where there were already more than 30 companies producing tires. With $20,000 from the sale of his Chicago business and patents for securing tires to wheels, he established The Firestone Tire & Rubber Company.

Firestone's skills in marketing and product innovation helped his business stand apart from his competitors. His company became known for its pioneering efforts in passenger, truck and farm tires, innovations in production processes, and early involvement in racing to showcase the durability of its products. By 1909, Firestone had teamed up with daredevil Barney Oldfield, who was barnstorming racetracks to thrill fans in his Firestone-equipped racecar. Oldfield won the Indianapolis Sweepstakes in 1909 -- a 300-mile race -- after which he proclaimed what may have been the first marketing tie-in to motorsports:

"My only life insurance is my Firestone tires."

The first Indianapolis 500 in 1911 was won by Ray Harroun on Firestones and the company began aggressively marketing its racing successes. Advertisements soon touted that tires winning at Indianapolis and other venues were not specially made, but stock tires that "any motorist gets when buying Firestone."

Firestone and his company continued to use racing as a proving ground, including developments such as non-skid treads, low pressure balloon tires and gum-dipping to insulate cords against heat. In 1920, Firestone began what became an incredible record: 47 consecutive years equipping the winning cars in the Indianapolis 500.

In recognition of his role as "a pioneer patron of Indianapolis racing," Firestone served as referee for the 1929 Indianapolis 500. The following year, he was presented a medal from the Race Drivers Association for his leadership in developing tires that contributed to "automobile safety and endurance records." Firestone died in early 1938, leaving behind a company that had become one of America's leading corporations. The company was acquired by Bridgestone in 1988.

In the early days of his enterprise, Harvey Firestone recognized the importance of motorsports in promoting the safety and durability of his products. More than 100 years later, "Win on Sunday, sell on Monday" remains a Firestone tradition.