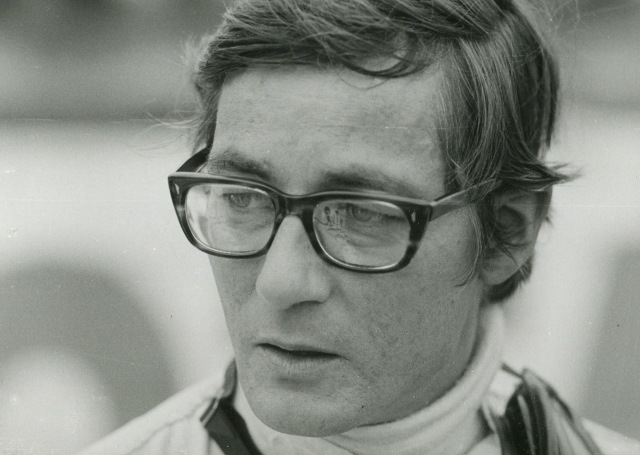 Masten Gregory was a true pioneer. He was the first American to compete on a consistent basis on the European-dominated Grand Prix circuit and helped pave the way for others. "The Kansas City Flash" was also one of the few drivers to wear eyeglasses, a practice still uncommon today.

Born in 1932, Gregory honed his skills drag racing on the Kansas City streets in Ford Coupes. Through the sale of his family's insurance company in 1951, he received a considerable amount of money and decided to go racing in an Allard. He won in his third start at Stillwater, Oklahoma, but it was with a C-Type Jaguar that he gained wider recognition. By the end of the 1953 season, Gregory was considered the top Jaguar driver in the US with wins at Golden Gate and Offutt AFB and a string of second-places. Gregory's European debut came on July 4th, 1954 in the Reims 12 Hour. He impressed many with his speed in practice and fourth-place finish with co-driver Clemente Biondetti.

It was Gregory's win in the 1957 Buenos Aires 1000 km with Castellotti and Musso that earned him a shot in F1. He was offered a fourth Ferrari by Enzo himself. Gregory chose Mimo Dei's Scuderia Centro Sud team instead because he'd get to compete in more Grands Prix. In his first start, he became the first American to score a podium with his third in the 1957 Monaco Grand Prix. He finished sixth in the World Championship his rookie season despite competing in only half the races.

Gregory suffered with mainly uncompetitive machinery in F1 thereafter but enjoyed considerable success in sports cars. In 1960, he became the first American to set fastest lap in the 24 Hours of Le Mans. In 1961, he won the Nurburgring 1000 km with Lucky Casner. And in 1965 he won the 24 Hours with Jochen Rindt for Luigi Chinetti's North American Racing Team (NART) in Cinderella fashion. IndyCar fans remember the Kansan's heroic charge a few weeks earlier in the Indy 500. Starting 31st, Gregory was up to fifth and lapping as quickly as the leaders when engine problems ended his run.

Gregory's career could best be summed up as unfulfilled potential and he is perhaps remembered most for surviving three high-speed bailouts. Like many drivers in that pre-seatbelt era, he believed it safer to jump out of a crashing car prior to impact. However, Gregory was highly regarded by his peers. He was a hero to future F1 Champion Jim Clark and Stirling Moss rated Gregory one of the top six drivers in his era.

Carroll Shelby, a member of the 1992 Motorsports Hall of Fame class, proclaimed Gregory "the fastest American who ever went over to race a Grand Prix car." He later added, "Masten Gregory should be in every racing hall of fame."