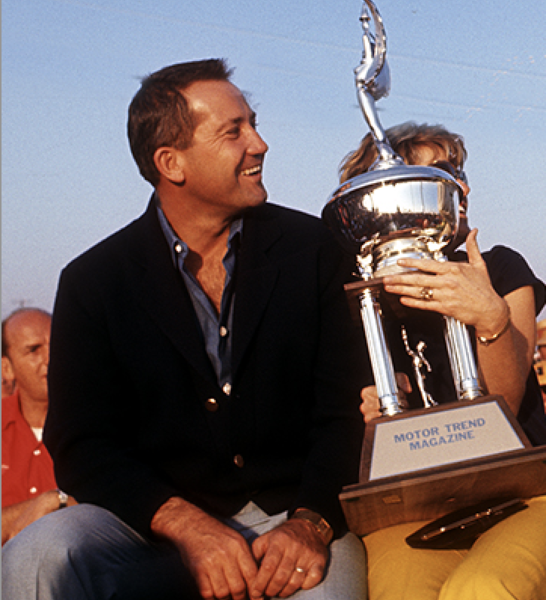 Born in East Los Angeles in 1926, and modestly self-described as "just a kid from Barstow," Robert Einar "Pete" Petersen was a true American success story. In January 1948, when he was barely 21 years old, Petersen set out to create a national publication to cover the fledgling hot rod community. Hot Rod Magazine, and the successes that followed -- Motor Trend, Rod & Custom, Car Craft, Guns and Ammo, Teen, Savvy, and Skindiving to name a few -- grew beyond his wildest expectations.

Bob Petersen was a tough, self-made, street-smart guy who never forgot his humble origins. He was quietly modest about his achievements. Looking back, it took guts to establish Hot Rod Magazine. Hot rod was a pejorative term. Pete had the vision to see that hot rodding was more than a bunch of speed-crazed kids racing at the dry lakes and on the street. Despite his youth, he knew if he could help focus this growing passion, and help make it legitimate and safe, the sport would grow -- and it would last.

Asked the "secret" to the success of his publications, Pete once responded, "We hired talented guys who really knew the subject matter: cars, guns, surfing, skin-diving, whatever. We could always teach people how to write," he'd say, "but it was more important that they knew what they were talking about."

"Pete was simply a brilliant businessman," said his long-time friend, and car collector, Bruce Meyer. "And he had great instincts for an opportunity. That started with Hot Rod, and it never stopped."

Petersen collected rare automobiles. He also collected friends. "Pete was a wonderful judge of people," says Meyer. "No one I know had so many 30-to-40 year-old friendships."

With his late wife Margie, Petersen generously established a Foundation to purchase the Petersen Automotive Museum from the County of Los Angeles. Its mission, from the outset, has been to educate and excite every generation of automobile enthusiasts.

"Bob Petersen helped create and feed the American obsession with the automobile," says former Petersen Museum Director, Dick Messer. "What made him so special was that he gave every ounce of his energy and abilities to his dreams. He was a quiet man who truly became an American icon."

Pete was very devoted to Margie. The tragedy they suffered losing their sons, Bobby and Richie, might have destroyed many marriages; it brought them closer together. They were very generous to the Boys' and Girls' Clubs, and the Thalians, supporting the mental health center at Cedars-Sinai Hospital. The Petersens helped countless Los Angeles kids, even though they'd lost their own. Pete passed away on March 23rd, 2007 from neuroendocrine cancer.

The late Carroll Shelby recalled: "We were friends for over 50 years. I owe Pete a lot. When I introduced the Cobra, he helped promote it with articles about the car in Hot Rod and Sports Car Graphic. Every CEO in Detroit respected him. He'd tell everybody, 'You should see this new car Shelby's built. It's a winner.'"

So was Robert E. Petersen.