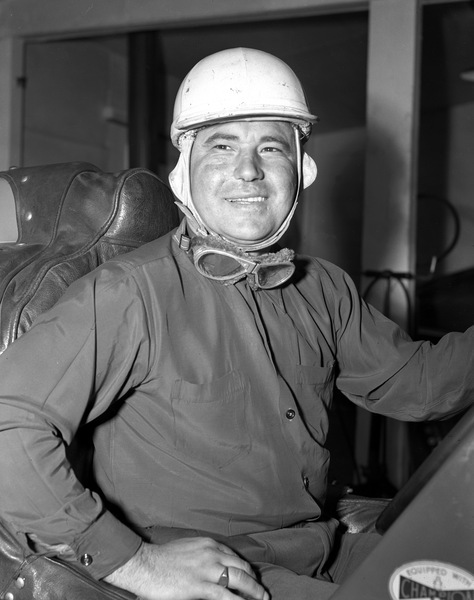 George Rice "Joie" Chitwood was born in Dennison, Texas on April 14, 1912, and by the time of his passing in 1988 his name was well-known across the country and around the world. However, long before he captured the imagination of audiences everywhere with his death defying auto thrill show he had already earned a reputation as one of the best open-wheel drivers of his generation. Chitwood's first appearance in a sprint or "big car" came in 1934 at the fairgrounds at Winfield, Kansas, and by the following year it was clear that he had racing in his blood. His talent was soon recognized by Al Sweeney, then working for legendary promoter J. Alex Sloan, and thus he was pointed toward the Midwestern fair circuit. In the ballyhoo promotional style of the time, Chitwood was often touted as Chief Wahoo, and foreshadowing his glory years as a showman, he played his role with great aplomb.

Racing with the tough Central States Racing Association, Joie finished second in series points in 1937 scoring his first win at DuQuoin, Illinois in September, and after finishing in the runner-up spot again in 1938 he set his sights on the A.A.A. Eastern series. Having earned his spurs against the best, Joie would take the 1939 and 1940 Eastern A.A.A. big car titles, and to add to the luster of these strong performances, he would make his first of seven appearances in the Indianapolis 500. By the 1942 season, Chitwood was back with the CSRA and outpaced Tommy Hinnershitz and Ted Horn for the crown posting the most dominating year of his career.

Although it wasn't readily apparent at the time, the life of Joie Chitwood was about to take a dramatic turn. It was during the 1942 season that well-known stunt man and thrill show owner Earl "Lucky" Teeter would die at the Indiana State Fairgrounds. In time, Chitwood would take control of Teeter's operation and enchant television audiences and fairgoers for decades to follow. In spite of new responsibilities, he still found time for auto racing. He would return to Indianapolis following the war and post a fifth place finish in the 1946 classic, an outcome he would replicate in 1949 and 1950, and when he still found time to race a sprint car he usually found victory lane. In 1946 he won six major events, and in 1947 he captured nine AAA Eastern big car feature events including the first race contested at the famed Williams Grove Speedway under the lights.

For his willingness to play the showman, and by employing a swashbuckling style, Joie Chitwood was not only among the very best drivers of his era, but he was clearly among the most popular with only the great Ted Horn in his class as a fan favorite. At the time of his retirement in 1950 he held a staggering 32 A.A.A. speed records. Now, his achievements have earned the ultimate honor - enshrinement with heroes from every form of racing in the Motorsports Hall of Fame of America.