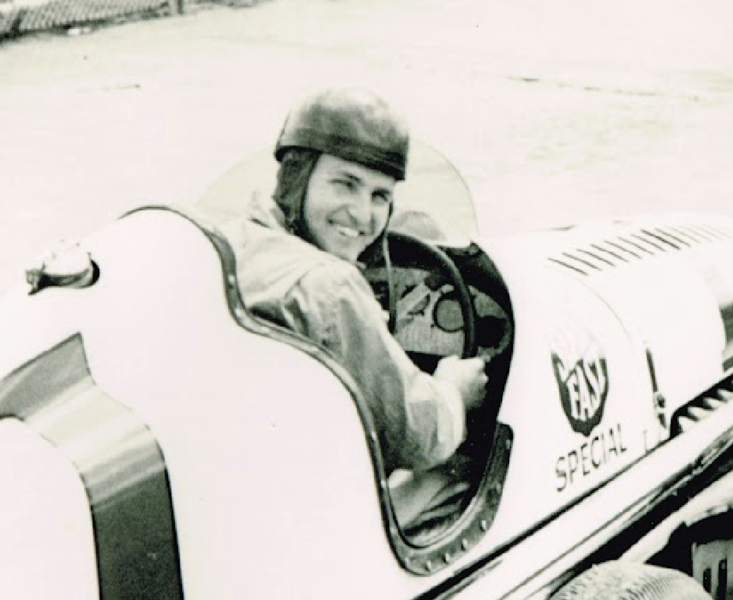 As a racer, Rex Mays was tougher than his cars; as a person, he enjoyed the reputation of being a fair, honest, and gracious man. Born in Riverside, California in 1913, Rex quickly became the driver to beat at legendary Legion Ascot Speedway in Southern California. He won the AAA Pacific Coast Championship in 1934 and 1935, and his winning ways at Ascot led to his chance to run the big cars at Indy in 1934. His second race at Indy was typical of his luck. He won the pole and led until mechanical problems struck shortly after the half-way point. He was to lead often, but a pair of seconds were his best reward at the speedway.

Although victory eluded him in the 500, he was the first driver e' win the pole three times, and he broke his own record with a fourth pole in 1948. It would be 27 years before AJ. Foyt would finally match that record-41 before Rick Mears would break it. Mays led nine of the twelve races he entered for a total of 266 laps. This was fifth on the all-time leader board at the time and the most of anyone without a victory.

Had Mays ventured to Europe he might have been an early Grand Prix star. He raced in the 1937 Vanderbilt Cup in New York and finished third. Tazio Nuvolari was so impressed with Mays' talent, he reasoned the outcome might have been different had he been behind the wheel of a proper Grand Prix car instead of an old Alfa Romeo. Considering that this was the peak of the German government-sponsored Auto Union and Mercedes dominance of Grand Prix racing, May's thirdthe only top three finish of the year for a non-German car-spoke loudly of his talents.

His America 1 rivals respected his driving skills just as much as the Europeans. After winning the 1941 Indy 500, Mauri Rose told reporter Russ Catlin, "he [Mays] wouldn't let up and I knew he never would. I had the faster car, but one of us was bound to make a mistake. I knew it wouldn't be Mays. I had to let his car beat him." The record books show that Mays won back-to-back National Championships in 1940 and 1941. But they don't show that he raced in an era when money was scarce and good cars even scarcer. Mays raced for the love of the sport.

Mays' postwar exploits were noted for fantastic battles and incidents of personal courage and leadership. At the 1948 Milwaukee race, for example, Mays crashed his own car to avoid hitting Duke Dinsmore, who had been thrown from his car onto the track; Mays proceeded to risk his own safety to direct the oncoming traffic around the helpless driver in the blinding dust. A plaque was placed on the barrier at the Milwaukee Fairgrounds dedicated to Mays' heroics. In later years, the race was named in his honor.

In 1949 Mays was signed to partner Duke Nalon in the Novi Mobil Special at Indy. The pair easily took first and second in qualifying; it was the seventh time Mays had started from the front row. The railbirds were ecstatic: Rex Mays was behind the wheel of the mighty Novi, the fastest driver in the fastest car. Speedway President Wilbur Shaw was quoted as saying "Rex Mays is the man who will tame that car. Rex is the complete driver and the only thing that can keep him from winning this race is the car. If that car is worthy of him then it is the first one." Sadly, both Mays and Nalon were out by the 50th lap as a result of mechanical failures.

'The 1949 race was Mays' last trip around the Brickyard. later that year, he was battling for position on the 13th lap at a Del Mar event when a wheel caught a rut and flipped, throwing him from the car. His tragic death, just over a year after that of good friend, and fellow Hall of Famer, Ted Horn, convinced his fellow drivers that seatbelts were a vital safety feature. Mays left behind Dorothy, his wife of 16 years, and two small children.

At the time of his death, Mays had been looking forward to the return of big time racing to his California home. His spirit saw that come to pass, as his legacy was carried on in the Rex Mays 300 held at Riverside International Raceway in the late 1960's, just a few miles from his old neighborhood. Big time racing in the form of Indy cars had returned to Southern California and Rex Mays was a leader once again.