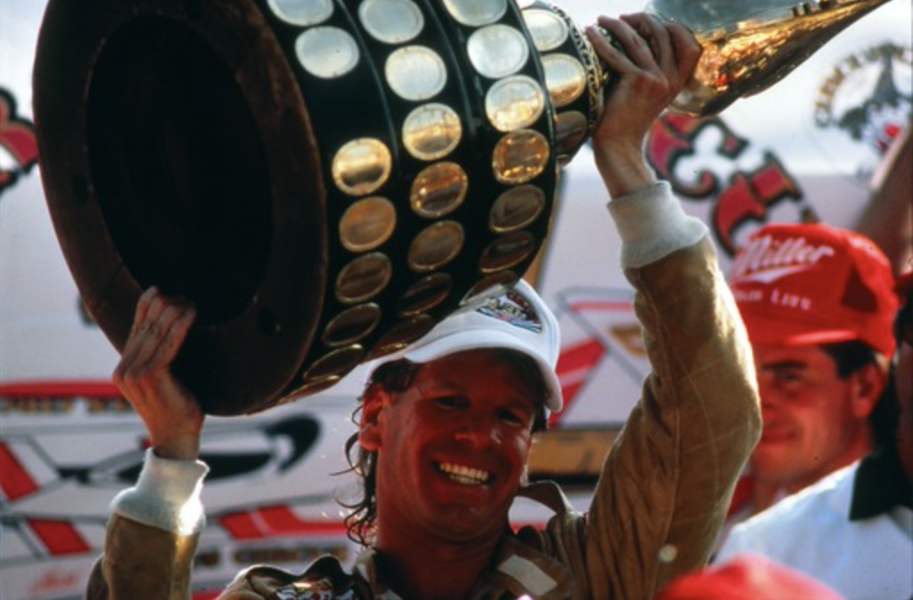 If Chip Hanauer had been born in Kentucky Bluegrass Country, he would probably have raced horses. If Indianapolis had been his childhood home, the Brickyard would have called him. But because he was born in Seattle, with all that water out there begging for him to race across it, he launched his boat racing career while still in grammar school. During a family camping trip, the boy, whose name would someday top almost every boat racing record list, found his way into competition in an outboard hydroplane. Soon after, nine-year-old Chip invested his paper route savings in ad-class outboard hydroplane, racing to fifth nationally for 9-12 year olds in his first year of competition. The rest is history, as Chip Hanauer became the greatest llydroplane racer in the world.

"I was in love with racing from the first, but I'll admit car racing was my first love," he says. "I was caught up in the romance of it, the international stars. My greatest admiration was for a man like Jim Clark who represented a great personality contrast. Here he was a mild mannered Scottish gentleman, a farmer, yet the master of his craft in a intensely aggressive profession." Hanauer by anyone's standard is the master of his own craft. After working his way through the outboard classes, he earned an invitation to drive automotive-powered inboard hydroplanes while still a teenager. At eighteen, he was APBA National High Point Champion in the 145 Class, initiating a series of victories that culminated 10 years later in 1982 in the Unlimited Hydroplane class with his first APBA Gold Cup.

In 1976, 22 year-old Hanauer had driven his inaugural Unlimited Hydroplane race in Tad Dean's vintage U-22 hull, going on to score his first Unlimited win in 1979 at Ogden, Utah, in the Squire Shop boat. Then for the 1982 Gold Cup in Detroit, first of an unprecedented string of seven straight wins, Hanauer piloted the Atlas Van Lines entry. Four more victories earned him the Unlimited National and World Championship, which he repeated in 1983.

From 1985-87, Hanauer took three Gold Cups in three seasons with the Miller team, winning his third World Championship in 1985. In 1988, in a damaged Miss Circus Circus, he took his seventh consecutive Cold Cup. In 1989 and 1990, driving for Circus Circus, he won his fourth and fifth APBA unlimited championships.

In 1991, Hanauer realized another of his dreams when he left boats to race cars for Toyota. His promising auto racing debut that included a victory at Portland was cut short when Hanauer, known in boat racing as the underdog who beat Bernie Little, was lured back to drive Little's Miss Budweiser in 1992 where he resumed his winning ways. He won a record eighth Gold Cup at Detroit, setting an all-time record of seven race victories in a single season. Taking Miss Budweiser to her 14th World Championship in 1993,Hanauer extended his Gold Cup record to nine.

Hanauer has fought back from injuries many times; he fractured four vertebrae as recently as 1994 in a warm-up crash at the Detroit Gold Cup. Three weeks later he returned to racing and put together three consecutive wins. "When you race for a living," he says, "you have to leave your baggage at the door."

Not unlike his hero Jim Clark, he is also a man of great contrasts, and finds that racing satisfies only one dimension of his personality: "I know there is more to my personality than someone who thinks about racing all the time." A cum laude graduate of Washington State University with a degree in Special Education, Hanauer spends much of his free time helping children with behavior disorders brought on by abuse. "Racing for a living has another benefit for me. It gives me the time to indulge myself. For me that has been working with emotionally handicapped kids. Also l like doing radio and 'TV work, being around creative people. People with a sense of humor."

At this stage in Hanauer's career, as the 40 year old driver becomes the youngest active racer in the Motorsports Hall of Fame, outsiders might view his future achievements as statistics in a record book with only a few challenges remaininghe is, after all, five career wins short of the Legendary Bill Muncey. "I'll have spent a good portion of my working life doing what l love. So many people don't get to do what they like. There's a feeling of satisfaction in winning doing what you love and making a living at the same time. I've gotten more than I ever have hoped for."