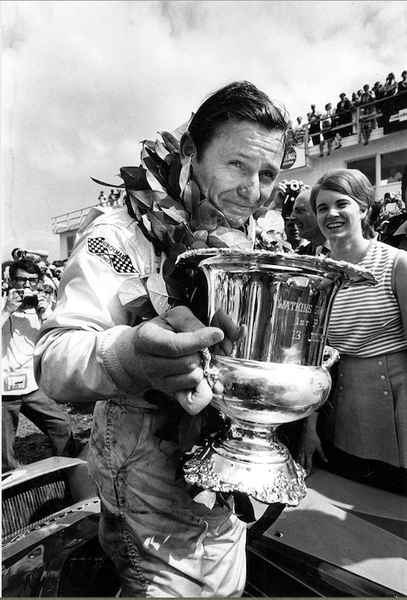 It would be hard to pencil out a better background to bring to motorsports than Bruce Leslie McLaren's. Born in New Zealand on August 30, 1937, Mclaren received formal training in engineering, but also demonstrated fine driving ability, winning his local racing clubs innovative "Driver to Europe" scholarship program. Once overseas, The young pilot quickly earned the respect of Australian Jack Brabham.

Before his 22nd birthday in 1959, Mcl.aren joined Brabham as an understudy on the Cooper Fl team. That December, he won the inaugural Fl Grand Prix of the United States at Sebring. In later seasons, he was first again in Argentina and Monte Carlo, and in 1960 and 1962 he scored second and third-place points, respectively, in the World Championship. McLaren became Cooper's No. 1 when "Black Jack" left in 1960 to form his own Fl team. Nursing his own ambition to build as well as drive, McLaren followed Brabham's entrepreneurial lead in 1964, beginning with a Cooper-based sports car. This was actually a converted Cooper Fl, the famous Zerex Special with which Roger Penske had dominated the professional races at Laguna Seca and Riverside in the fall of 1962.

McLaren bought the nimble Zerex in 1964 and won his second and third races in England with the car as received. Days after the second victory he and his small crew stiffened the middle section of the steel tube space frame and replaced the original 2.7 liter Coventry Climax four with a 215-cubic inch/3.5-liter all-aluminum Traco V-8 derived from Oldsmobile's F-85. Bruce drove this Cooper-Oldsmobile to victory in its first race at Canada's Mosport Park in June 1964. In August he won again at Brands Hatch in England.

That same fall, Mcl.aren developed the basic design into the first car to carry his name, the McLaren MIA. While it retained certain Cooper suspension and steering parts, its magnesium-paneled space frame wore a shapely new body by stylist Tony Hilder. Powered by a larger-bore, 34()-horsepower, 3.9-liter Traco-Olds, McLaren led the autumn 1964 races at Riverside and Laguna Seca until water hoses blew off. Chris Amon finally scored the first of several factory MIA victories early in 1965. Steady evolution brought forth the MIB (or "Mark 2" in the U.S.), now powered by an iron-block Chevy, and later the MlC/Mark 3, but victories failed to follow.

McLaren broke with Cooper in 1966 and introduced his first Fl car, the Ford Indy-engined M2A. That year, he also gained priceless engineering experience as one of Ford's primary GT40 development drivers, culminating in a 1966 I.eMans victory with compatriot and Can-Am teammate, Chris Amon.

Oddly, time for the first truly great McLaren sports car, 1967's M6A, was created by a delay in the following season's F1 program. Having discarded the original Ford engine and an Italian successor, McLaren switched to the BRM V-12, but development troubles left the MSA chassis sitting empty for months. Using the downtime to full advantage, the team created the superb M6A Group 7 Can-Am car.

The M6A would lead to an historic season for McLaren. Driving with Denny Hulme (that year's F1 champion for Brabham), the pair won five Can-Ams and got Bruce the championship. That set the pattern for the next four years, starting with the 1968 MBA, whose 7.()-liter aluminum Chevrolet V-8 finally overcame teething problems to earn Hulme the championship. In 1969, the team enjoyed an 11-for-11 season with the high-winged MOB, and McLaren earned his second championsllip. When the SCCA banned the high wing in 1970, Mcl.arcn repositioned it lower between extended rear fins, creating the MOD "Batmobile." Sadly, while testing that car on June 2 at Goodwood, the rear-hinged bodywork suddenly flipped open and sent the car spinning into a nearby concrete flag station platform. Mcl.aren was killed instantly.

Dying with him was one of his favorite projects, the creation of a roadgoing GT. While the FIA rejected his plan to create a GT40 style racing model on the M6-design chassis, Bruce built four anyway, fitting out one as his personal GT.

Cheerful and universally well liked, McLaren was remarkably self effacing. He never claimed to be the world's fastest driver and often smilingly discounted his own engineering ability; "Make it simple enough even I can understand it," he'd tell his team. But his own work at the drawing board and in the cockpit resulted in racing machines that vanquished all comers in Group 7 for five years, and in later years were top contenders at Indianapolis, and won many Fl championships.