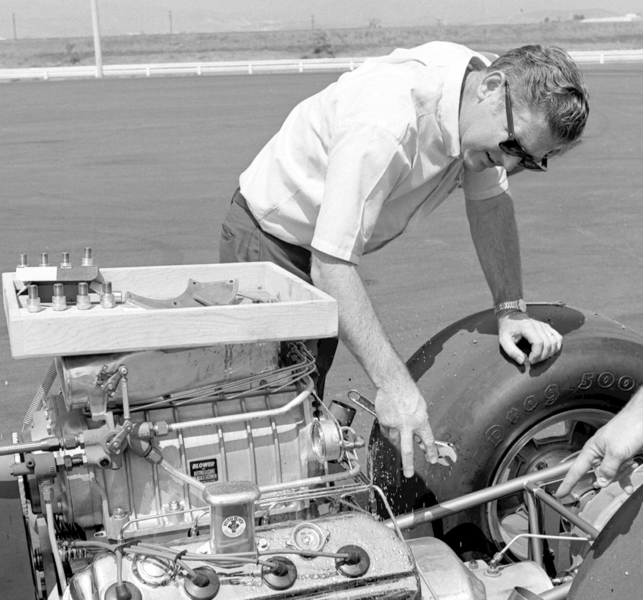 by Neil Britt and Chris Martin

The name Keith Black is synonymous with drag racing engines. He was so successful that his name, and even his initials, have become part of the racing language.

Born in Huntington Park, California, 1927, Keith Black lived and worked h1 the Golden State all his life. From an early age, he was a hands-on kid: "I always liked to get involved with mechanical things. When I was about 14,1 talked my mother into letting me take the old family car apart. I put rings and bearings in it, and when my dad came home, he about croaked when he saw his car al apart in the driveway, and his kid working on it." His apprenticeship in the world of high performance included stints with Clay Smith, Art Sparks and Cliff Collins.

Black made his name first in the world of boat racing in the mid- 1940s. He was a fast learner, setting a world record the second time out on the Salton Sea. "I raced boats for a bit of myself, then someone said, 'Come build an engine for me,' and I built an engine (a flathead) for him. And then somebody else would say, 'Well, gee, that ran good, so build me one,' and someone else would want one, and so on. I got started in my backyard in the engine business. "

In 1959, he opened Keith Black Racing Engines. By 1961, his boat racing exploits included nearly 50 national and international records. As his reputation grew, drag racers began to solicit his expertise. Tommy Greer, a longtime friend, then approached Keith with the idea of running a car together. It took more than a little convincing, but the final result was the famed Greer-Black-Prudhomme Top Fueler. During the 1962 and 1963 seasons, it won over 250 eliminator rounds and lost fewer than 25! Prudhomme was succinct in his assessment of Black's abilities: "It was unbelievable how smart this Keith Black was."

Part of what made Keith Black so smart was his ability to take advice from the right people. "I accept what people say, if they are the authorities on what they are taking about; if what they say makes logical sense, then why not buy?" This information exchange was very much a two-way street. Many racers can remember long phone conversations with Black, picking his brain for insights, which he readily shared. "We provide an ongoing service center for information," he said of his organization. "There is no limit. We've always tried to take the attitude that, if the customer does well, then we do well; so anything we can do that will enhance his capabilities to do better; ultimately we gain from."

After stints with Roland Leong's Hawaiian Top Fuel dragsters in the late 1960s and the Plymouth Barracuda Funny Car campaigned by "Big John" Mazmanian in the early 1970s, Black abandoned hands-on drag racing. He limited, if you can call it that, his activities to that of an engine manufacturer.

Keith Black's development skills were not only known among racers, they were highly regarded by the Big Three as well. In 1965 Chrysler contracted with Black to develop their marine racing program. Keith loved this type of R&D work because of the challenge it presented, and the fact that it made good business sense.

In 1971, Ed Donovan introduced the first aftermarket aluminum engine. Before long a half-dozen engine building businesses were battling for the lion's share of the aluminum aftermarket block/engine combo market. In less than a decade, Keith Black Racing Engines would come to dominate the market.

Virtually every top-name racer who has competed in Top Fuel or Funny Car has at one time used Keith Black equipment. His customers included legends "Big Daddy" Don Garlits, Don Prudhomme, Shirley Muldowney, Kenny Bernstein, Joe Amato, John Force and "T.V." Tommy Ivo. In addition to his famous engine work, Black was a pioneer in the development of clutches in the late 1960s when it was discovered that huge clouds of tire smoke wasn't the fastest way down the strip.

Affectionately known as "Uncle Keith" to many friends in the drag racing community, his passing in 1991 to cancer was a sad day for all high-performance enthusiasts. Black was survived by his wife Jane and two children. Today, his son Ken continues with the family business.