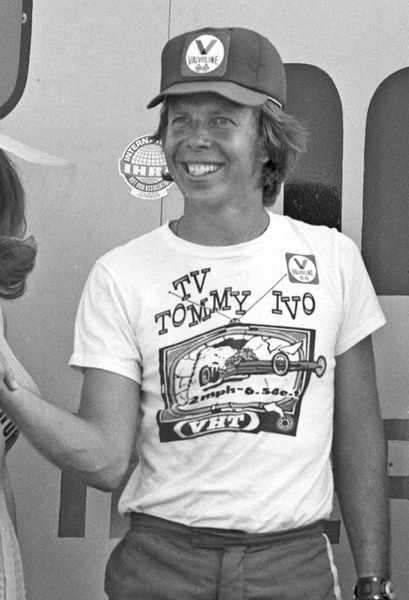 Today's professional drag racing features elaborate haulers, hospitality areas and equipment to rival that of any motorsport. Tommy Ivo played a major role in getting it there.

"T.V. Tommy's" nickname was earned by appearances as a young actor in nearly 100 movies and 200 television shows. His show business experience taught him that a good show will always bring crowds back for more and he became drag racing's Master Showman.

Most drag racers of the 1950s were concerned primarily with performance and the appearance of their machines often suffered.  From the beginning, Ivo's cars looked as good as they ran. His first success came with a new '55 Buick that won its class and set a new track record on the same day. Before his career ended he turned speeds over 300 mph, and raced 36 different cars in 12 classes.

Ivo's first real race car was his Buick-powered Model T roadster pickup. It was versatile enough to be undefeated in class, earn countless show trophies and magazine features and appear in teenage exploitation films of the 1950s.

The roadster's success led to Ivo's first dragster. Powered by an injected Buick, it was the quickest gas dragster in the country and won Top Gas honors at the first U.S. Fuel and Gas Championships in 1959. When the 1957-63 fuel ban was enforced at most Southern California strips, Ivo elected to build a twin-Buick dragster to make up for the lack of liquid horsepower. Like its predecessors, it graced magazine covers and became the first to run under 9 seconds on gasoline, the first to run over 170 mph and the first over 180 mph.

In 1960, he became the first drag racer to tour the country with a nationwide season-long tour. Appearance money made him drag racing's first touring professional. It was good for Ivo and good for the sport.

He designed and built his spectacular four-Buick dragster, arguably the most successful drag racing exhibition car of all time. Producers of the TV show "Margie," in which Ivo co-starred, put a stop to his drag racing when the behemoth appeared on the December '61 cover of Hot Rod Magazine. Unlike fellow cast members, he was delighted when the show was cancelled.

He immediately embarked on a 20-year odyssey that took him from fuel dragsters to jets and every corner of the country. Moving to the fuel ranks, Ivo was the first in the 7-second bracket and the first to exceed 190 mph. He was a proud member of the first United States Drag Racing Team and won the 1964 British Drag Festival. Ivo and Don Garlits became the talk of Europe. Back home, they hit the match race circuit, meeting as many 72 times at 72 different drag strips in a single season. For many years, Ivo averaged about 70,000 miles on the road and 80 to 100 dates.  He once raced at eight different strips in seven days. Despite the "Hollywood Movie Star rich kid" image he fostered, Ivo built, tuned, drove and maintained his own equipment. In 1972, he became the first member of the Cragar Five Second Club and shortly after survived a horrific 240 mph crash without a scratch.

When most racers still towed trailers behind the family station wagon, Ivo toured in a glass-sided 10-wheeler truck carrying two dragsters and a matching Corvette push car. As dragster popularity waned in the mid-´70s, Ivo switched to Funny Cars. He also built a state-of-the-art jet dragster complete with glass showcase trailer. The jet gave him the high-speed ride of his life for two years. But the years on the road finally took their toll and he finished his career on a farewell tour with his old four-engine car in 1982.

After 30 years of drag racing, he retired leaving behind a legacy of professionalism and showmanship that paved the way for the corporate sponsorships and superstars of today's drag racing.