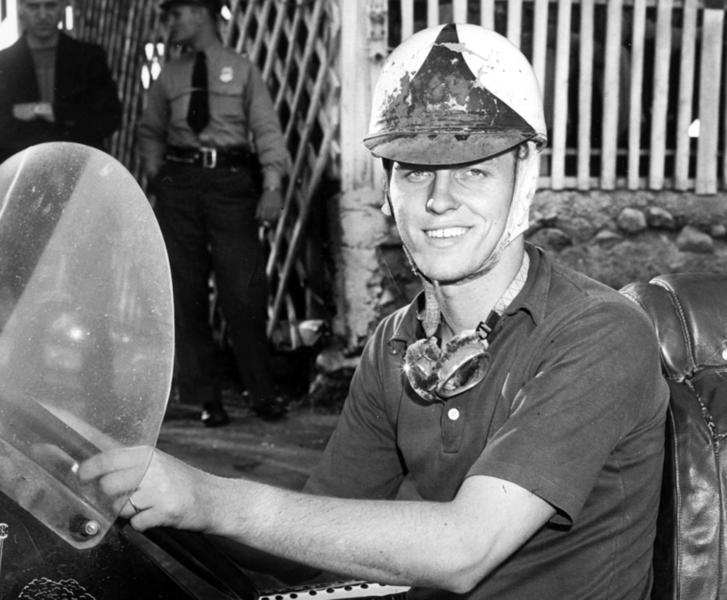 When Troy Ruttman won the Indianapolis 500 in 1952 he was 22 years 2 months old, the youngest driver to win the Greatest Spectacle in Racing. In the half century since, no one has come close to winning at such a precocious age.

A towering figure at 6 foot 3 inches and 250 pounds he undoubtedly was the biggest winner, too.

Driving J.C. Agajanian's red and cream No. 98, the big kid from Ontario, Calif., by way of Oklahoma, ran the 500 miles at an average of 128.933 mph., a record at the time. Shortly after the race, he said, "I feel so good I could drive another 500 right now." It was the last of the old Offenhauser-powered dirt track cars to win the 500.

Ruttman drove eight more times at Indy, but could never recreate that great day in 1952. In fact, he won only one more Indy car race, a month after the 500, before breaking his arm severely in a sprint car accident. It kept him away from racing for nearly two years and life for Troy was never the same after that.

His winning the 500 at 22 was, in his own words, "A classic case of too much, too soon." Instead of undergoing strenuous rehabilitation following his arm injury, he spent his time, again in his own words, "Drinking, playing cards and chasing women."

The Legend of Troy began when he was 9, living in the Los Angeles suburb of Lynwood. His father, Butch,.had taught him to drive and one day when his mother wanted to visit a friend. Troy volunteered to drive. He was doing fine until an officer noticed his youth and pulled him over.

"It wasn't the last one, though," he said years later with a hearty laugh. When Ruttman was 15 he starting racing, and winning, at the Ash Can Derby in San Bernardino, a dusty, dirty quarter-mile oval where they paid $25 for a win. He used a cousin's birth certificate to get eligible. At 17, still lying about his age, he won the California Roadster Assn. championship.

Newspaper reports hailed him as the "Pride of the Bobby Soxers."

From Southern California's hot rod circuit, where he was unbeatable for several years, he headed for Indy, still only 19. He wanted to drive for Agajanian, but J.C. knew his age and wouldn't let him in one of his cars until he was 21.

That occurred in 1951, but a broken crankshaft ended his day after 78 laps. In 1952, after qualifying seventh Ruttman led 40 laps in mid race and was steadily closing on leader Bill Vukovich when Vukie's steering broke eight laps from the finish.

Handsome, personable and gregarious, he was a natural salesman and built a thriving motorcycle and snowmobile business in Detroit. Any urge he may have had to get back into racing ended in 1869 when his eldest son, Troy Jr., was killed during a race in Pocono, Pa.

Later, Ruttman learned to fly, moved to Venice, Fla., and ran an aircraft brokerage business. More significantly, he quit the fast life that he known since he was a teenager. "I'm more proud of giving up drinking and gambling and all that other stuff than I am of winning the 500," he said a few years before he died of lung cancer on May 19, 1997.