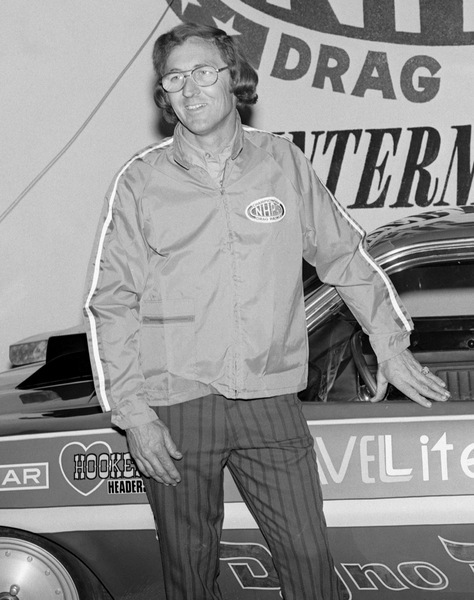 His glasses may be the thickness of Coke bottle bottoms, yet he sees with the clarity of an eagle. Dyno Don Nicholson has, throughout his illustrious career, always been ahead of the curve, never behind it.

One of the first standout stars in National Hot Rod Association (NHRA) competition with a factory hotrod, Nicholson won back-toback Winternationals titles in 1961 and '62 in Stock Eliminator with a Chevrolet, but with dwindling factor support he eventually changed his allegiance to the blue oval of Ford Motor Company.

By the mid-60s he was match racing his Fords against the superstars of the era, eventually carving out a niche for himself that included the likes of Bill "Grumpy" Jenkins, Sox & Martin and "Dandy Dick" Landy. As the primary spear carrier for Ford Motor Company, Nicholson had all the match race dates he could handle and then some, but approached each appearance with remarkable professionalism. A master at the trademark showmanship of the era, his sweeping in of tractioninducing "gold dust" (powdered resin) was an act unto itself, as were the sometimes six or eight burnouts that followed it.

Quick to change with the times, Nicholson was among the first to discard carburetors and gasoline in favor of injectors and nitromethane fuel as Funny Cars began to steal the limelight from their somewhat slower counterparts. Although exactly who debuted the first real fliptop Funny Car remains in question, if not the first to have one, Nicholson was certainly among the first two or three with his Logghe Stamping Company-built Mercury Cougar. The fans cold have cared less who had the first flip-top car. They only knew one thing: Dyno Don was the man with that Cougar, and honored him by electing him to the first All-Star Drag Racing Team in 1967 in the Match Race Division. One year later Nicholson would again be named to the team as its first Funny Car Driver winner.

But, as Funny Cars gained nationwide popularity, the NHRA lagged somewhat behind the times in recognition of the class, so Nicholson spent his time competing on the American Hot Rod Association (AHRA) trail.

Highly respected by both the fans and his peers, Nicholson made several outings in NHRA's Competition Eliminator, where handicapped racing usually resulted in his crowd-pleasing nitro-burner being an early loser, although in 1967 he made it to the final round of the U.S. Nationals at Indianapolis before losing to Paul Stage's "conventional" Comp roadster.

As more and more Funny Car match racers switched to superchargers for quicker elapsed times and faster speeds, Nicholson decided to go the other way, returning to carburetors and gasoline and match racing as the 60s wound down. Once again running with cohorts Jenkins, Landy and Sox & Martin, the fourand many othersfound a home for themselves on the AHRA Grand American Circuit in a new class simply labeled "Super Stock." Unlike the NHRA version, which featured handicapped racing to accommodate a wide variety of body and engine combinations, the AHRA class featured heads-up racing, 2,300 lb. cars and engines displacing well over 427 cubic inches. The fans loved the action, and NHRA paid heed, instituting what would quickly become Pro Stock as the 70s began.

After sporadic outings in "formal" national event competition Nicholson devoted his considerable talents to the match race circuit, where the financial rewards were a bit more lucrative, and the rules markedly less restrictive. Still, the urge to compete against recognized competition burned within this former Georgia native, and in 1977 Nicholson and his Ford Mustang made the full NHRA tour, emerging with his first and only NHRA Winston championship. He would make one more championship run, coming home in third place after the 1979 campaign, but since then he's been far from retired.

One of the stalwarts of a growing number of well-known competitors from the 60s and 70s now appearing in special nostalgia races, Nicholson has also been a headline performer on the NHRA circuit, making popular exhibition runs at the Winternationals and Winston Finals in Pomona, California, and the U.S. Nationals in Indianapolis.

In recognition of his career-long accomplishments and contributions to drag racing Car Cra* Magazine named Nicholson its Ollie Award winner as part of the All-Star Drag Racing Team program way back in 1977, but the still competitive Dyno Don is far from retirement. He's got his eye on the new NHRA Pro Stock Truck class, and is watching the new eliminator's development with a keen eye. If he decides to jump into the fight in'98, we wouldn't be at all surprised to see our latest Hall of Fame inductee win another championship. After all, it's in his nature.