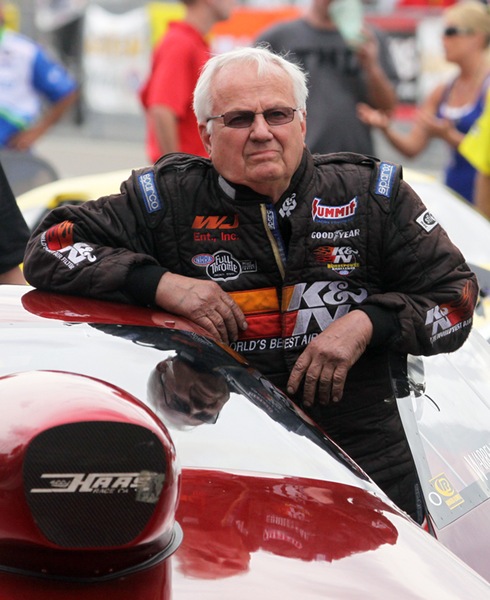 It's been said many times that the victors write the history books, and that statement seems applicable to drag racing, where the well-respected National Hot Rod Association is the endeavor's acknowledged leader. Still, it must be noted that despite the successes many Hall of Famers enjoyed in that series, drivers like Shirley Muldowney, Raymond Beadle, Connie Kalitta and Chris Karamesines are among many who rose to national prominence as a result of their exploits in other series. Such is the case with Warren Johnson.

Long before he became a six-time NHRA Pro Stock champion and Georgia resident, Johnson's big-block Chevy Vega came thundering out of Minnesota to barnstorm the old AHRA Grand American Series, taking the measure of future Hall of Famers Bill Jenkins, Dyno Don Nicholson and the vaunted duo of Sox & Martin, among others.

When NHRA added Pro Stock to their agenda, Johnson's fortunes soared. His attention to detail, willingness to work around the clock (he's been known to step away from Thanksgiving dinner to head back to his dyno room), plus his studied approach to everything from chassis setups to cylinder head configurations and more soon earned him the sobriquet "The Professor." Although Johnson was often willing to share what he knew, he preferred to teach his lessons on the track, and in that classroom he was seldom headed. His 97 wins, the second most in NHRA history, proves that as does his streak of 303 straight starts. That he was the first to break the 200 MPH barrier in 1997 was just more icing on the cake, as were his five appearances in the final round of the Horsepower Challenge, a special race for Pro Stock. Johnson has qualified for the Challenge a record 24 times. No other driver is even close.

While Johnson still makes an occasional appearance in competition, his elder statesman status with his peers has not only changed their perceptions of him, it's mellowed the man some were almost afraid to approach in years gone by. WJ rarely lost his temper while being peppered with questions from another racer, but what would set him off were questions he felt that competitor should already know the answers to. He had, and continues to have, little patience for time-wasters and glad-handers, and pity the writer foolish enough to ask, "What's it like out there?" or something equally inane.

There was a time when, despite his championships and victories, racing officials were loath to visit Johnson's pit area, for he was never afraid to voice his opinions on anything and everything. Nothing was sacred, be it a series sponsor, a rules adjustment he didn't like, or even the purse structure, something he vigorously campaigned about from Day 1. As the years went by and his sandy hair turned white, an increasing number of his competitors came to understand that it was The Professor's willingness to speak up for everyone else that set him apart from the crowd. His induction into the Motorsports Hall of Fame is fitting, well-earned and maybe, just maybe, a little overdue.