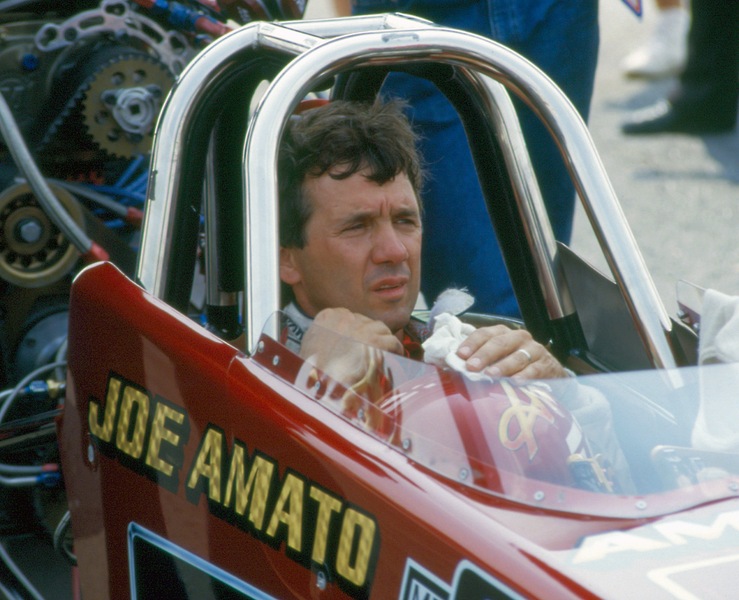 During the heyday of his very successful Top Fuel career in the late 80s and early 90s, they called his legions of fans "Joe's Army." While his stellar performances attracted the attention of many, it was his easygoing personality and accessibility that ultimately proved to be his best "recruiting" tool. Far from being an aloof "commanding general," Amato was, and continues to be today, just one of the guys. That, as much as anything else, endeared him to the fans and media.

Before his retirement following the 2000 National Hot Rod Association season, Amato had amassed a record the likes of which is unlikely to be surpassed in the future. In some respects Amato's standards may have the longevity of Joe DiMaggio's 56-game hitting streak, or Richard Petty's 200 NASCAR victories.

The number five plays a prominent role in this exceptional competitor's records. For but one example, Amato's 52 race wins are 19 more than his closest still-active competitor, with the level of competition being such that it's going to be extremely difficult to close the gap.

In terms of total professional victories, Amato is fifth – and sixth overall when his five sportsman wins are added. He's also fifth on the all-time Number 1 qualifiers list and the only five-time points champion in NHRA Top Fuel history. When he wasn't winning the championship outright, Amato was easily finishing in the Top 10, a consistency he maintained for 18 consecutive seasons. And let's not forget that Amato notched six impressive wins in the Budweiser Top Fuel Classic along the way.

Following his victory in the Mile-High Nationals in 2000, word leaked out that Amato had suffered what appeared to be a career-ending eye injury. Despite the setback, he completed the season fourth in the standings – winning again at the Keystone Nationals on his home track in Reading, PA. Sensing that the end of his career was coming, Amato was convinced to make the '01 season a retirement tour, but within hours wisely decided to hang up his helmet and concentrate on being a team owner.

From the ever-present Snoopy cartoon character that decorated his race cars to his effervescent personality, Amato was, and continues to be, a media and fan magnet. His interviews, often hilarious in delivery and content, effectively kept his business acumen from the public as Amato always made an effort to separate his business and racing lives despite the fact that they were irrevocably intertwined. Amato and his family were the founders of Keystone Automotive, which eventually morphed into Key Parts. Regardless of the name, it ultimately became the largest chain store operation in the eastern half of the country, with Amato personally responsible for a great deal of that growth. Amato eventually served on the SEMA Board of Directors, a position from which he had considerable influence on national legislation affecting the legality of high performance hardware for street-driven vehicles.

Unlike some former drivers, Amato has taken to the role of team owner with the same level of enthusiasm that he brought to his driving and business careers. He remains open, friendly and a fan favorite. Small wonder he's been elected to the Motorsports Hall of Fame. His "army" wouldn't have it any other way!