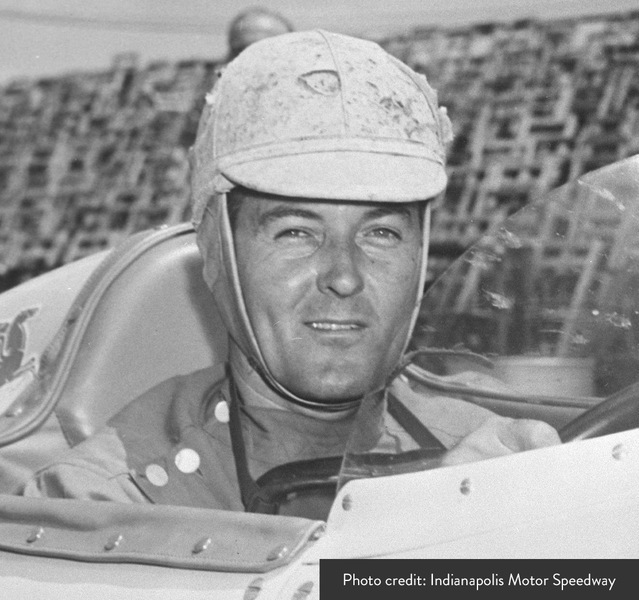 Californian Johnnie Parsons was an outstanding midget car driver of the immediate post WWII years who went on to win the Indianapolis 500 and the AAA national championship. The smartly dressed and crowd pleasing champion finished second in his debut at Indianapolis in 1949 and then won the rain-shortened "500" the following year.

Parsons won 11 national championship events between 1948 and 1952, and for several seasons until early 1955, laid claim to more championship points in post-war competition than any other driver. Parsons scored one victory in 1948, five on his way to the 1949 title, two in both 1950 and 1951, and one in 1952. In fact, he won the final race of the year in three straight seasons, his 1950 victory coming at the famed and then brand new Darlington Raceway in South Carolina.

In addition to competing in the Indianapolis 500 ten times (1949-58), Parsons finished third overall behind Jimmy Bryan and Troy Ruttman in the three-leg 500-mile Race of Two Worlds invitational event at Monza, Italy in 1957.

His interest in racing began as a child when his uncle leased garage space to dirt track driver Fred Lecklider and to eventual legend Frank Lockhart, both of whom Johnnie met. He sold programs in the grandstands at the Gilmore Stadium midget track as a teenager, idolized driver Bob Swanson and pledged to emulate him. He became multi-talented within the sport, learned to weld and was hired as a young man by famed builder Frank Kurtis, never dreaming the two of them would eventually win the "500" together.

Passionate about midget car racing throughout his adult life, he got his start in this form of motor sport in 1940 and was declared the champion of the United Midget Association for the war-abbreviated season of 1942.