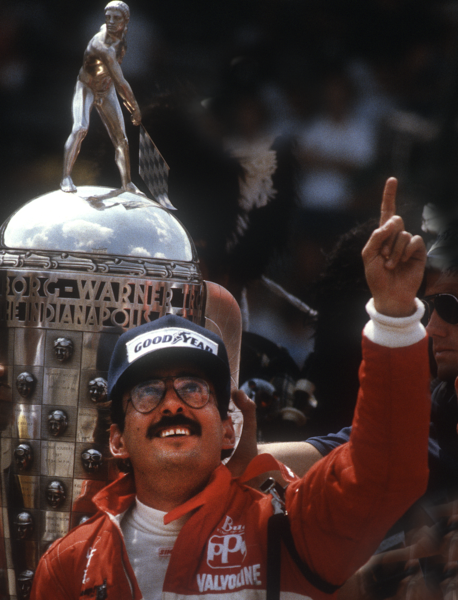 The career that earns Bobby Rahal a Motorsports Hall of Fame induction is one of diversity and dedication, marked by excellence as not only a driver, but a team owner as well.

His driving record is anchored in a trio of national championships won while posting 24 Champ Car victories -- one of them, the 1986 Indy 500, his special farewell for long-time patron Jim Trueman.

Six years later, partnered with Carl Hogan and backed by old pal Jim Prescott's crew, he became an owner/driver and alternately outran, outlasted and outfoxed Michael Andretti and Al Unser Jr. to claim his third championship. Six seasons on, that career shift had taken him out of the cockpit completely, and into ownership full-time -- a move that thrust him and partner David Letterman back into the spotlight at Indianapolis this May as owners of Buddy Rice's victorious Dallara-Honda.

The seed from which it all grew was planted before young Robert Woodward Rahal ever spent a day in public school. He tagged along as his father, Mike, pursued an amateur racing career in the early '60s, ultimately serving as strategist and crew chief for the effort. Upon turning 18, he made his own debut at the wheel of Dad's 1800cc Elva-Porsche in a novice race on the old Harewood Acres circuit near London, Ontario.

Victory in B-Sports at the SCCA Runoffs followed, and soon thereafter he gravitated to the fiercest crucible of competition on this continent-the Player's Challenge Series for Formula Atlantic-then approaching its incendiary zenith. In May of 1975, he skipped graduation at Denison University to make his Atlantic debut at Edmonton, and that fall won the Runoffs a second time in his first Atlantic drive for Doug Shierson. After three seasons of matching wits and pace with the likes of Gilles Villeneuve, Keke Rosberg, Bill Brack and Price Cobb, a comeback drive in Pierre Phillips' Ralt at Long Beach caught the eye of Walter Wolf.

Wolf sent Rahal off to Europe for a season of Formula 3, and that autumn he made his Grand Prix debut for Wolf's F1 team at Watkins Glen and Montreal. Nothing came of it, however, and after spending '79 in Formula 2, he abandoned his F1 hopes and turned his attention stateside. Landing in the Can-Am, he ran regularly at the front until joining forces with Trueman to tackle CART's burgeoning PPG Cup series for 1982.

They won their fourth start, at Cleveland, claimed Rookie of the Year honors and, over the course of the next six Champ Car seasons, Truesports collected 16 further victories and two championships. Rahal left the team after the '88 campaign, driving for Maury Kraines and Rick Galles before hooking up with Hogan for '92 to generate four more wins and a third crown.

His open-wheel prowess was complemented by similar success in sports cars, if on a smaller scale. Wins in the 1981 24 Hours of Daytona, with Brian Redman and Bob Garretson in a Porsche 935, and the 1987 12 Hours of Sebring, where he shared Bruce Leven's Porsche 962 with Jochen Mass, highlight his sports car scorecard. Three other GTP triumphs and a Can-Am win round out the Rahal rsum.