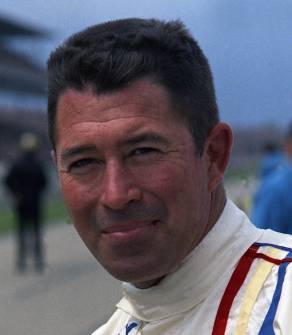 Roger McCluskey was not only a tough and fiercely competitive race driver on the track, but a thoughtful and respected mediator off of it.

During his lengthy career, he won championships in three different divisions of the United States Auto Club and drove in 18 Indy 500s. But what set him above many of his fellow competitors was his ability to look beyond himself and negotiate feuds and differences of the competitors, owners and the sanctioning bodies.

It is a combination of these talents that has earned McCluskey a spot in the Motor Sports Hall of Fame of America as part of the class of 2011.

A prime example of his ability to be both a driver and peacemaker came in 1979. At 48 he was struggling to find enough speed to qualify for his 18th Indy 500. But this didn't prevent him from becoming a calming voice as upstart CART and USAC battled over who had control of the sport at the world's biggest racing event.

The dark-haired veteran from Tucson, Ariz., (he was born in Texas) had been racing since the late 1940's and was deeply disturbed that his sport was in such turmoil.

On the track over 30 years, he gave no leeway to his competitors, but his style was never uncontrolled. Even early in his career, his fellow drivers selected him to represent them at various meetings. Though serious about serious things, he also could be fun-loving and friendly at other times.

The Indy 500 was his nemesis. His best finish was third in the rain-shortened 1973 race, but there was a flock of DNFs. He never completed 200 laps.

"He was a good driver, very smooth," said fellow driver Bob Harkey. "I think he was better on dirt, but good on both."

McCluskey, who also drove in four NASCAR races, IROC and the 24 Hours of LeMans, retired on a high note by winning at Milwaukee in 1979 and then hanging up his helmet.

That fall he moved into the USAC office as Director of Competition and later executive vice president was added. In 1989 he was diagnosed with cancer and even while taking chemotherapy and forced into a wheelchair, he still made it to the daily decision-making meetings. He came to the office on Aug. 24, 1993, to celebrate his 63rd birthday and then passed away five days later.

USAC named a trophy, the Roger McCluskey Award of Excellence, after him.