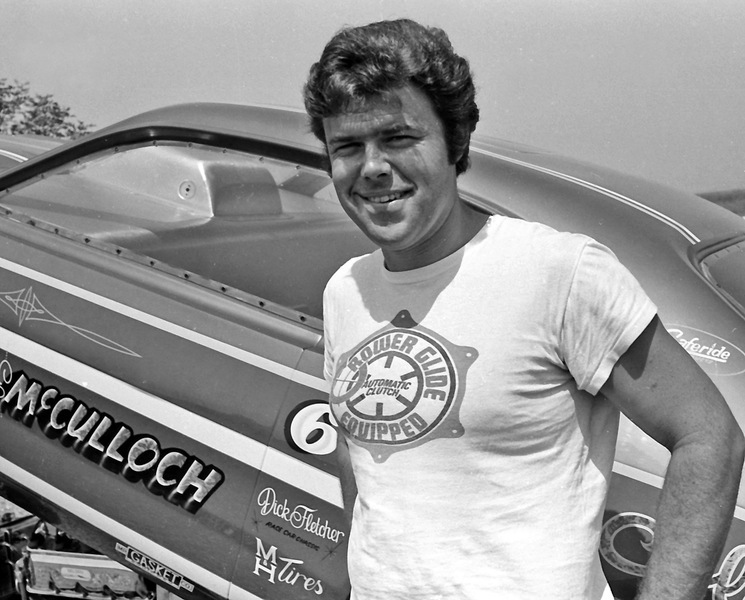 While drag races last mere seconds, first impressions may last a lifetime – and sometimes they're wrong. Such is the case with Ed "The Ace" McCulloch, for the man being inducted this evening is decidedly not the same individual who burst onto the scene some three decades ago. Standing in the place once occupied by a brash, fearless driver of anything burning nitromethane is a bespectacled man looking like a corporate executive. The alteration in McCulloch's personality has been dramatic. Prior to his retirement as an envied crew chief, older fans would stop by to reminisce about McCulloch's earlier exploits, stories the 20-Something mechanics working under his direction refused to believe. If they only knew!

McCulloch's maturity has paralleled the maturation of the endeavor he's devoted himself to. Perfect for his times, McCulloch was sometimes rough and crude, but over time, both he and drag racing became professional. While others were polishing their resumes, McCulloch made his own by winning races. Along with publicity-producing national event wins (18 in Funny Car and another four in Top Fuel), McCulloch was a master at out-performing his rivals at hired-in appearances, where he was just as determined to win. He did not like losing, and rarely failed to express those sentiments when it happened. And woe be unto the driver who "burned him down" on the starting line, i.e., delayed final staging before the race could begin.

Every racing series has its hallmark event. Drag racing's Mount Everest is the NHRA U.S. Nationals. It's the race everyone wants to win. In some respects it's as important as winning a championship. Victors at Daytona or Indy are never forgotten even if their cars never sport a Number 1. Ed "The Ace" McCulloch never won an NHRA championship – but he won the U.S. Nationals six times! Six times he fought and clawed his way through the four-day marathon that is Indy. Six times, as the sun set on Labor Day, McCulloch stood sweat-stained and clutch dust covered in the winners circle.

But, lest you think of McCulloch as a one-trick pony, during one stretch of his brilliant career he qualified for 109 straight races. A dozen times he ended the season in the Top 10. He's been named to the All-Star Drag Racing Team, and was recently was inducted into the International Drag Racing Hall of Fame.

When he retired as a driver he made an effortless transition into becoming one of the sport's most sought-after tuners. Unlike many of his contemporaries, who viewed computers as the devil's tools, "Ace" embraced the new technology, quickly mastering the nuances to tuning success they provided. Just as he was a winner behind the wheel, he became a winner in front of the computer screen, but it was more than that. When he and his driver talked there was a real connection. McCulloch knew what the driver was experiencing, just as the driver knew he could bare his soul to a man who had seen everything drag racing had to offer.

Simplistically put, there are three basic "classes" of participants in motorsports; drivers, tuner/mechanics and builders. It's rare that an individual occupies more than one slot. Ed "The Ace" McCulloch is one of those exceptions, and there's no more fitting place for him to be than in the Motorsports Hall of Fame of America.