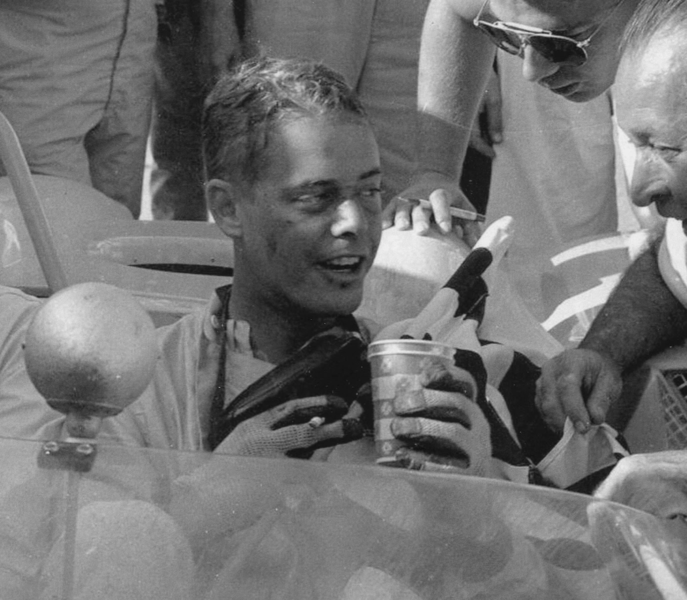 Augie Pabst had a relatively brief racing career, spanning but ten years. But in those years he won numerous races, took two major Championships, and became one of the most popular and charismatic drivers of the day.

Augie's involvement with racing began when he founded Pabst Motors, an imported car dealership on Milwaukee's east side. He started racing in May, 1956, with a Triumph TR-3, moving up to an AC Ace -Bristol the next year. Augie had several class victories in both cars before buying a 2.5 liter Ferrari TR for 1958. In this car he won the first of many National races, winning the Milwaukee SCCA National over a field of much bigger cars.

He continued in the Ferrari the next season, placing well in several major events before he received a career changing call from Harry Heuer, who owned the Meister Brauser Team and had just purchased a Scarab. Would Augie drive it?

Of course he would. Pabst quickly won the Meadowdale and Vaca Valley rounds of the USAC Road Racing Championship, and combined with points scored earlier in the season, won the 1959 USAC Championship.

Success continued in 1960 as Pabst won SCCA National races at Road America, Meadowdale, Watkins Glen, El Paso, and Daytona, winning the SCCA Championship and being named the Competition Press Driver of the Year. Augie Pabst in the iconic Meister Brauser Scarab cut a swath through US racing, becoming one of the premier stars of American sports car racing.

A serious crash at Daytona in February, 1962, when a blown engine in a Maserati caused an end-over-end crash, put Pabst out of action for many months, but he came back in 1963, now driving for the Mecom Racing Team. A win in the GT category at the Sebring 12 hours started the year, and he added a great win in the Continental Divide USRRC in a one-off return to the now obsolete Meister Brauser Scarab. A second win in the Road America 500, plus the Nassau Tourist Trophy race, followed. The 500 win was especially noteworthy as Augie drove the first half of the race in a Mecom Ferrari, then relieved Bill Wuesthoff in the small 1.8 liter Elva Porsche, bringing that car home first in a giant killer role. The fact that he was co-driving with Wuesthoff, who was his driving school instructor, made the win even sweeter.

Augie won his third Road America 500 the next year in a season in which he was dogged by mechanical failures. He formed his own team for 1965, ordering a new McLaren for himself. Unfortunately, the McLaren was very late in coming, and when it did it was destroyed in a fire at Mosport.

His career wound down after this, an executive position with Pabst Brewery precluding any further racing. But when Pabst left the Brewery in 1983 he entered vintage racing, driving his old Scarab, which he had purchased earlier. Pabst now enjoys life with wife Joan, keeping busy with his cars, with his directorship of Road America, and the major development of his Pabst Farms property.

And oh yes, he did drive the Ford rental car into the swimming pool in Monterey in 1961!