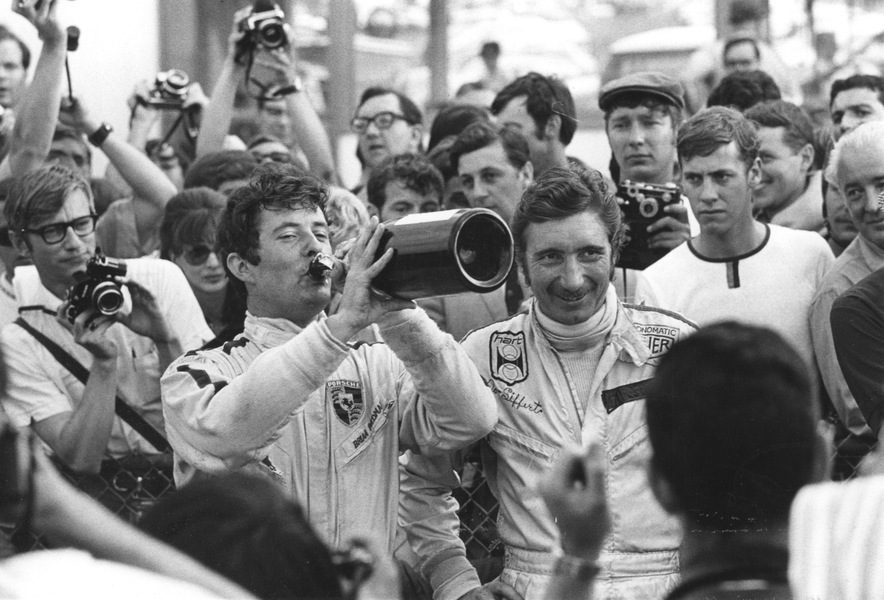 After a brutal crash at the 1968 Belgian Grand Prix when the suspension collapsed on his Cooper-BRM, a doctor advised him that in the emergency surgery he was about to perform the 31-year-old might lose his badly damaged right arm. Redman thanked him and smiled. The startled physician asked why.

Redman made it through the procedure with both his arm and trademark sense of humor intact and went on to become one of the greatest drivers of his generation in everything from sprint races to the world's premier endurance contests.

The Englishman is best remembered for his many successes in what was known then as the World Sportscar Championship (WSC). In all, Redman captured 30 races of six hours or more duration and was a member of the teams that won the 1968 (Ford), 1969 (Porsche), 1970 (Porsche) and 1972 (Ferrari) world titles. Redman was so prolific in endurance contests that in 1970 he came in first and second at the Rolex 24 at Daytona, spending time in both of the J.W. Engineering Gulf-Porsche 917Ks. Later that year, he and teammate Jo Siffert captured the Targa Florio. Redman won the Rolex 24 at Daytona three times (1970, 1976, 1981) and the 12 Hours of Sebring twice (1975, 1978).

Redman has spoken so openly over the years about his apprehension of the old and fantastically dangerous 8.76-mile Spa-Francorchamps circuit that you might not realize that he was also its master, winning the 1000 km four times — in 1968 with Jacky Ickx, 1969 and '70 (Siffert), and 1972 (Arturo Merzario) — and the 500 km once in 1970 in a Chevron B16 Spyder, for which Redman was the inspiration. Even Redman was surprised years later when he read in Gulf team manager John Horsman's book, Racing in the Rain, that he'd recorded the fastest times of all when he, Pedro Rodriguez and Siffert were driving the fabulous powder-blue-and-orange 917Ks. Why, he asked Horsman, had he never told him? "Because, Brian," Horsman said quite practically, "if you'd known, you might have wanted more money."

Redman's concerns about the dangers of the sport in that period were such that he quit it briefly in 1971, only to return seemingly faster than before. If there is an injustice in his reputation as an endurance specialist, it's that so many overlook his equal success in contests of pure speed. In the early ‘70s, Carl Haas and 1994 inductee Jim Hall selected Redman to be their driver in the SCCA F5000 open-wheel series. He won three straight championships (1974-6) against the likes of Mario Andretti, Al Unser, Sam Posey and David Hobbs — inductees all — and might have taken the title in 1973 as well. That year, he collected five wins to eventual champion Jody Scheckter's four, but had to miss two races due to his obligations with the Ferrari factory WSC team.

Perhaps it's fitting that in 1981 Redman ran away with a major championship that incorporated both sprint and endurance contests. IMSA had just launched its GT Prototypes or "GTP" class and Redman arranged with Lola's Eric Broadley to build a new chassis for it. Before he set the final wheels in motion, Redman contacted series boss John Bishop. "John," he asked, "if Lola build a car to your new rules, do you promise not to change them halfway through the season?" To which the 2014 inductee replied, "Brian, do you promise not to win every race?"

Both sides kept their end of the bargain. Redman took five wins and five seconds and ran away with the title.

Redman closed out his mainstream professional career with Bob Tullius' Group 44 team and the later Aston Martin AMR1 effort. In the years since, Redman has remained active in the sport. He's in constant demand as a guest driver at major historic races here and in Europe and holds court each year at The WeatherTech® International Challenge with Brian Redman presented by HAWK at Road America. He owns Targa 66, a club for owners of high-performance road and race cars, and published the must-read memoir, Brian Redman: Daring Drivers, Deadly Tracks.