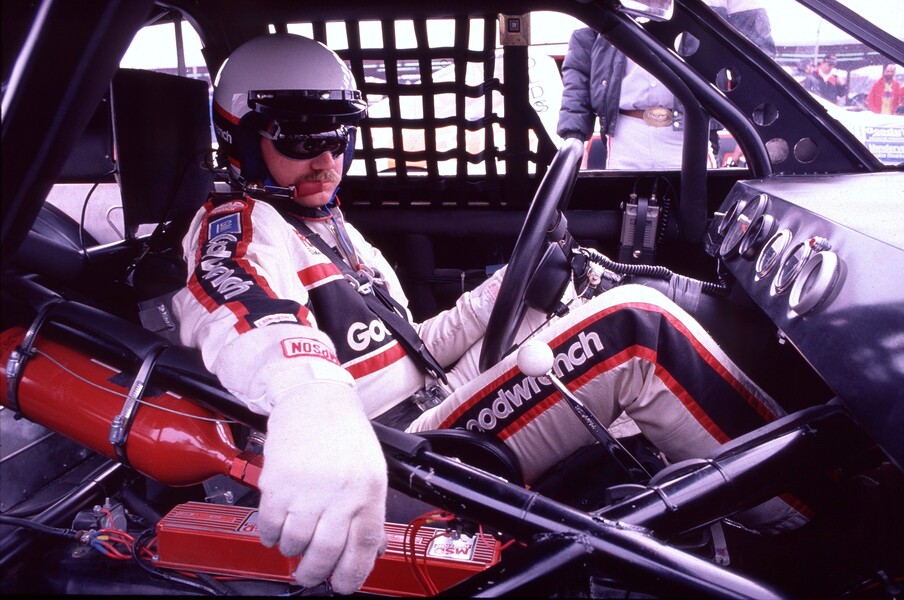 On April 2, 1979 Dale Earnhardt won the Southeastern 500 at Bristol International Raceway, the first of 76 victories he would score en route to tying Richard Petty's record of seven Winston Cup championships. Along the way he amassed $41,708,384 in winnings.

Earnhardt's first title came in just his second season, besting veteran Cale Yarborough in a dramatic duel that was decided by only 19 points.

In 1984 he joined Richard Childress in a pairing that was to make motor sports magic. Over the next 18 years the two North Carolina natives shared Victory Lane 67 times and won six Winston Cup championships.

Along the way, Earnhardt's daring and intensity on the track brought him nicknames like "One Tough Customer," "Iron Head," "The Man In Black" and most famously "The Intimidator."

Although he won races on every type of track, Earnhardt seemed his best in the fastest races and at the hardest tracks. He won 10 times at Talladega and nine times at Darlington. He also won nine times at Bristol.

Dale won most often at Florida's Daytona International Speedway, scoring 30 victories at the 2.5-mile track in various events, none in the storied Daytona 500, until 1998 - his 20th attempt.

And it was in the Daytona 500, on Feb. 18, 2001, that a crash took his life in the fourth turn on the last lap, running third and watching cars he owned driven by Michael Waltrip and Dale Earnhardt, Jr., flash to the finish line 1- 2.

In 1999, Sports Illustrated Magazine name Junior Johnson the greatest driver in NASCAR history. "That's not right," Johnson said firmly on the day of a memorial service for Earnhardt in Charlotte. "Dale Earnhardt is the greatest ever, bar none."