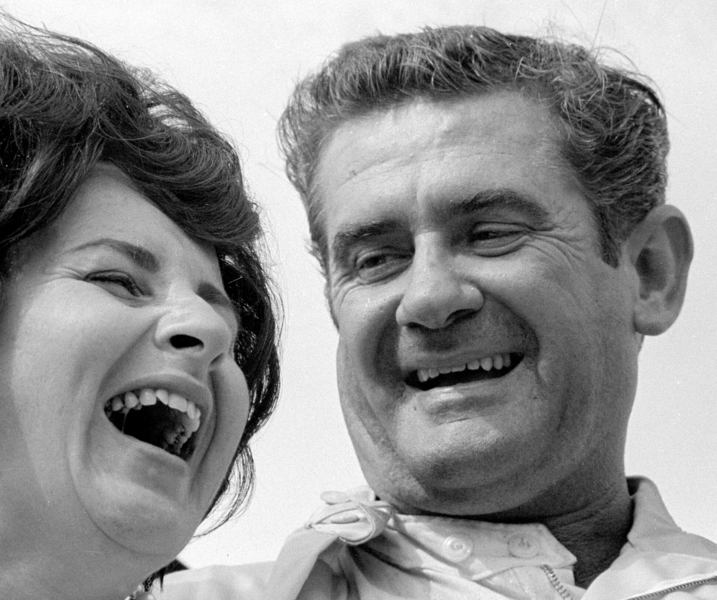 Buck Baker sort of laughs, as you try to grasp exactly what he's just explained. Not that the explanation lacked anything. Perfectly clear, actually. It just doesn't quite seem possible ... not that Baker is bragging or anything.

He points out that he didn't win the race, he simply finished the thing using a pair of locking pliers to turn his car's steering wheel after the steering wheel itself had broken off during the event.

He's still sort of chuckling, either not realizing the superhuman nature of what he's described or, more likely, having become comfortable with it years ago. This is Buck Baker, you see. This is toughness incarnate, a living definition of everything rowdy and raw, daring and durable ... the poster child, you could say, for stock car racing's earliest days, long before the sport straightened its hair and showed its pearly-whites.

Ask anybody about Baker and almost down the line you get a oneword answer: Tough. As nice as that sounds in print, it's not stretching the truth, either.

"It just didn't get too tough for him anywhere," Baker's son, Buddy, explains to the fullest.

Buck Baker was one of racing's original, and best, tough guys in an era of tough guys.  The kind who learned to spit dirt and like it ... drivers who, as Baker puts it, "would race for 30 minutes and then fight for 30 minutes."

As if straight out of Southern lore, Baker was a bootlegging, drinking, womanizing, race-car-driving original, apologizing to no one along the way, by God.

And when it came to being tough, Baker, an orphan farm boy from Chester, S.C., stood out. "I didn't go to the race track to make friends," he says.

He went to win. And during NASCAR's infancy, few did that better.

Baker's was a career that paralleled the development of NASCAR's highest level, a division that evolved into today's Winston Cup Series but which originally was called Strictly Stock when Baker drove in its inaugural race in 1949.

From 1952 to '64, Baker won at least one Grand National (now Winston Cup) race a year save one (1962), and during an incredible eight-year run (1953-'60) he never finished lower than fifth in NASCAR's Grand National standings.

Baker even was champion of NASCAR's Speedway Division in 1952, the year Bill France Sr. experimented with a brief venture into sanctioning Indy-type cars.

As Buddy Baker puts it: "Lee Trevino once said, 'if somebody's got to win, it might as well be me.' That was my father."