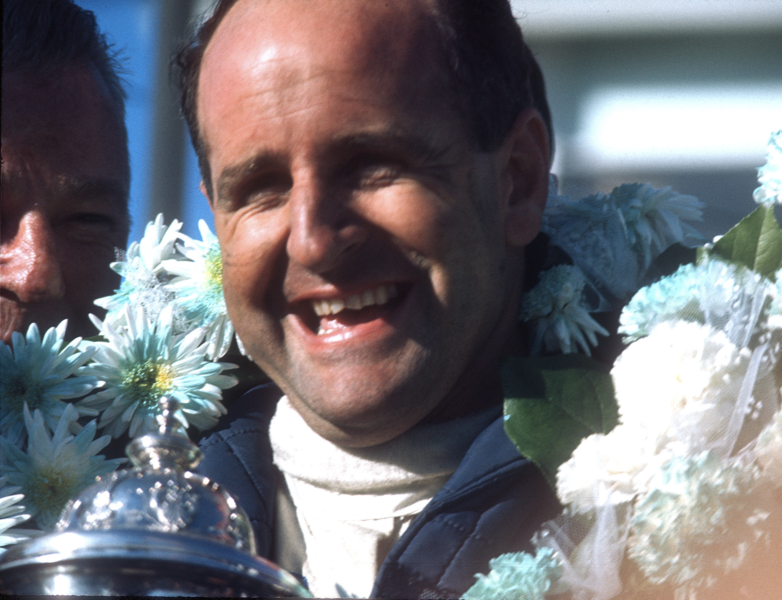 The Bear, we called him. He was wary of people and could indeed be irascible, even rude, with those who rubbed him wrong. Get on Denny's right side, though, and you'd find bubbling humor, warm generosity and deep intelligence. And how that man could drive.

Denis Clive Hulme, son of a holder of the Victoria Cross, was born in Nelson, New Zealand, on the 18th of June, 1936. He built his powerful physique by shoveling sand for the family construction business, and his driving career began in the firm's trucks on rough back roads. He liked to drive with out shoes for a better feel of the pedals, so when he took up racing the newspapers called him "the barefoot boy from Te Puke."

He first raced an MGTF, which his parents gave him in 1955. Five years later he won the NewZealand International Grand Prix Association's Driver-to-Europe award, a scholarship which also boosted the careers of his country-men Bruce McLaren and Chris Amon. In 1965 Jack Brabham invited Hulme to join his Formula One team, and after Black Jack took his third World Champion-ship in1966, Denny earned the title in '67.

The next season Hulme switched to McLaren, for whom he was already driving sports and Indy cars, and that happy association lasted to his retirement at the end of 1974. During his ten F1 seasons, Hulme competed in 112 Grands Prix, winning eight, finishing in the points (the top six) a further 53 times, and setting nine fastest race laps. Only once did he take pole position, at South Africa in 1973, but he started a total of 23 GPs from the front row.

It was unlimited sports-racing cars that Denny-the-Bear drove to his widest fame. After dominating British "Big Banger" races with a Lola T-70, he led McLaren's epochal assault on the North American Canadian-American Challenge Cup series, winning that championship in 1968 and '70. In his six Can-Am seasons with McLaren he won 22 races, more than twice as many as any other driver of the era.

Also with McLaren he twice started the Indianapolis 500. In 1967his World Championship yearhe was named Indy's Rookie of the Year. In 1970, a fire in an Indy car badly burned his hands. Only days later Bruce McLaren was killed. Denny kept his bandaged hands on the wheel and the spirit in his team mates.

Despite his burly looks, Hulme didn't always seem to be working very hard. In fact, he sometimes looked a lazy old bear, and never missed a chance to take a nap atop a toolbox or a stack of tires. Often, when all about him were chickenlittling about some car preparation crisis or other, he'd settle nerves by calmly declaring, "She'll be right. "And if she wasn't, he'd make her right, seizing a recalcitrant vehicle by the scruff of its neck and hurling it bodily toward the finish line. Watching Denny drive could drop your jaw.

Though retired from the big leagues, the Bear wouldn't give up the sport, and he was at the wheel of a race car when he died of heart failure on October 4,1992. Denis Hulme, OBE, is survived by his wife, Greeta, and daughter, Adele. His son, Martin, died in a diving accident on Christmas day in 1988.